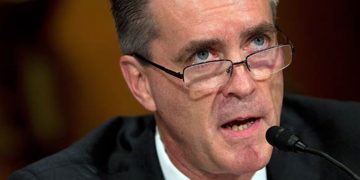 Washington, September 16 (NIA):  The United States reminded Pakistan on Thursday, that its struggle with terrorism will not come to an end until it makes a decisive shift in its policy of tolerance towards externally-focused groups.

Richard Olson, US Special Representative for Pakistan and Afghanistan, told the Senate Foreign Relations Committee that the Obama administration had also conveyed this message to the Pakistani government, reminding Islamabad that there could be no peace in the region until these cross-border attacks stopped.

Olson, who was the US ambassador in Islamabad before taking up his current position, also emphasized the need for a constructive relationship between Afghanistan and Pakistan, which he said was essential for bringing peace and stability to the region.

He noted that relations between Pakistan and Afghanistan experienced a “significant improvement” when Afghan President Ashraf Ghani came to power but they “peaked and troughed” over the past year in part due to critical issues, including refugees, border management, and counterterrorism.

But he also underlined “some encouraging signs” of progress in recent months, adding that after a meeting in June between Afghan and Pakistani foreign policy chiefs, both sides agreed to coordinate at senior and tactical levels on border management issues. In the first tactical-level meeting in late July both sides agreed to meet again.

We support this mechanism and believe that more bilateral dialogue between Afghanistan and Pakistan will increase prospects for mutual understanding, regional peace and stability,” Olson said.

In the wake of the deadly August 24 attack on the American University of Afghanistan in Kabul, Afghanistan provided Pakistan with evidence that prompted the Pakistan military to conduct combing operations in a few key areas along the border.

Pakistan is sharing the results of those operations with Afghanistan.

“Efforts to bring those behind the attack to justice are critical,” said Olson, while noting that Pakistan’s military operations in the Federally Administered Tribal Areas were also important.

He noted that the Pakistani military had made progress in shutting down terrorist safe havens through Operation Zarb-i-Azb and most recently in Operation Khyber III in the Rajgal Valley of Khyber Agency.

Such operations aimed at restoring security to parts of Pakistan that had been used as terrorist safe havens for years. Pakistan had also worked with the United States to decimate core Al Qaeda, he added.

“While the progress Pakistan has made through its recent operations is laudable, its struggle with terrorism will not come to an end until it makes a decisive shift in its policy of tolerance towards externally-focused groups,” Olson warned.

“US officials have been very clear with the most senior Pakistani leadership that Pakistan must target all militant groups without discrimination – including those that target Pakistan’s neighbours – and close all safe havens.”

The US diplomat told the Senate committee that Pakistan’s leaders had assured the United States of their intention to do so.

Mr Olson also welcomed Chief of Army Staff Gen Raheel Sharif’s statement on July 6, in which he directed Pakistani military commanders, intelligence agencies, and law-enforcement agencies to take concrete measures to deny any militant group safe haven or the use of Pakistani soil to launch terrorist attacks in Afghanistan.

He acknowledged that Pakistan had also played a critical role in generously hosting 1.5 million Afghan refugees for nearly 40 years.

Mr Olson conceded that Pakistan’s contributions in this regard had been essential to providing asylum space for Afghans displaced by conflict and in furthering our goal of long-term peace and stability in the region.

“Pakistan should continue to uphold humanitarian principles and respect the principle of voluntary return, as outlined in the Solutions Strategy for Afghan Refugees,” he added.

Ambassador Olson said the United Sates would also continue to support the India-Afghanistan relationship, including through the revival of a US-India-Afghanistan trilateral talks, which will take place next week on the margins of the UN General Assembly.

“We welcomed India’s provision of training and non-lethal security assistance to Afghanistan and its significant development contributions over the past decade-plus,” he said,

Olson also appreciated China’s e merging role in the region, and welcomed its participation in the Quadrilateral Coordination Group.

“Russia and Iran can play positive roles in Afghanistan, but will require intensive US engagement to reassure them that they can place their faith in the Afghan government,” he added.

In June , Olson said that Pakistan’s concerns over India’s role in Afghanistan were “overestimated”.

Disagreeing with Pakistan’s concerns that India was using its strong presence in Afghanistan to stir trouble in Balochistan, the US envoy said: “India has been a supportive partner for Afghanistan. It has provided a limited amount but important military assistance (to Afghanistan).”

He was addressing a think tank, the Atlantic Council, in Washington.

Olson also said the United States would provide more than $3 billion a year in support for the Afghan national security forces from 2018 through 2020.

The US Special Representative for Afghanistan and Pakistan, said the administration planned to ask Congress for about $1bn a year in development and economic assistance for Afghanistan from 2018 to 2020.

Olson was asked to comment on the perception in Pakistan that India had set up 24 consulates in Afghanistan, some close to the Pakistani border.

There were only “four Indian consulates in Afghanistan”, said the US envoy while explaining how the perceived Indian threat was exaggerated in Pakistan.

“I sometimes feel that the degree of Indian influence on Afghanistan may be overestimated in Pakistan,” he added.

Olson reminded Pakistani decision makers that they had their own security concerns and needed to focus on them.

“Pakistan will not be secure, until and unless” it took action against terrorist organizations, like the Afghan Taliban and the Haqqani network, he said.

He, however, noted that the ongoing military operations in Waziristan had curbed terrorist attacks inside Pakistan, which resulted in reducing violence and stabilizing the Pakistani economy.

But Pakistan’s reluctance to take strong action against terrorist networks that carry out attacks outside its territory had impaired its success in curbing terrorism at home, he added.

“Pakistan will not have a bright future until and unless it goes after the Taliban,” he warned.

Olson noted that the Afghan Taliban had consolidated themselves under the new leadership, which took charge after a US drone strike eliminated Taliban chief Mullah Akhtar Mansour in Balochistan in May 2016.

He appreciated Pakistan’s commitment to the Afghan peace process and urged Islamabad to use its influence on the Taliban to persuade them to join reconciliation talks.

The Wall Street Journal, however, reported on Tuesday that some peacemakers viewed the drone strike that killed Mullah Mansour as a setback to their efforts to restore peace to the war-ravaged country.

“Striking the leadership was a mistake,” said Paolo Cotta-Ramusino, Secretary-General of  The Pugwash Conferences on Science and World Affairs.

“We need to interact with the Taliban’s leadership, not take them out.”

The Pugwash is a conflict-resolution group that met Taliban representatives in Qatar recently.

After the drone strike, the Pentagon called Mullah Mansour an obstacle to peace and President Barack Obama said he didn’t expect the Taliban to move towards peace talks soon, WSJ said.

But the Taliban appointed a hard-line religious leader to replace Mullah Mansour and stepped up attacks on government targets, the report added.