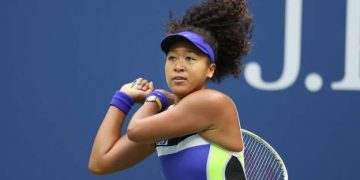 by Editor
in Around The World, Sports, Tennis
Reading Time: 2 mins read
2 0 Japanese tennis star Naomi Osaka is a force to be reckoned with in women’s tennis. Her victory at the 2020 U.S. Open was her second at the tournament and the third overall. We look at a few interesting facts about her you may not have known. © Al Bello/Getty Images

September 13 (Omnisport) – Naomi Osaka landed her second US Open title in three years – and unlike last time there was an unmitigated joy for the Japanese player.

Her 2018 triumph was largely overshadowed by Serena Williams’ outbursts towards umpire Carlos Ramos, which led to a hostile crowd atmosphere, even during the trophy ceremony.

Osaka hid her face behind a visor, having been reduced to tears, and it was about as unpleasant as any first grand slam victory experience could possibly be.

On that occasion, Osaka struggled to find a smile. Sensing the crowd were baying for a Williams win, she said then: “I know everyone was cheering for her and I’m sorry it had to end like this.”

But this time Osaka had her moment, albeit in unusual circumstances, with no spectators inside Arthur Ashe Stadium but for a scattering of officials, players, coaches and loved ones.na

She was able to celebrate with her team, with nothing to detract from the moment.

The satisfaction was obvious, with the 22-year-old securing her third slam, lying down on the court and taking in the moment after fending off Victoria Azarenka 1-6 6-3 6-3.

Osaka would have raised laughter from a crowd with her description of that moment, explaining why she did not fall immediately to the floor after sealing the win but carefully chose her spot.

“Because I always see everyone collapse after match point,” she said, asked what was going through her mind. “But I always think you may injure yourself so I wanted to do it safely.”

She explained how she was able to turn around the match. Doing so made Osaka the first player since Arantxa Sanchez Vicario against Steffi Graf at the 1994 US Open to drop the opening set yet take the women’s singles title.

“I just thought it would be very embarrassing to lose this in under an hour so I had to try as hard as I can and stop having a really bad attitude,” Osaka said.

There was clear bonhomie between the two finalists, with Azarenka telling Osaka: “I’m very happy for you and I hope we can meet in some more finals again.”

In response, Osaka said: “I actually don’t want to play you in more finals. I didn’t really enjoy that! It was a really tough match for me.”

She came onto the court wearing a mask bearing the name of Tamir Rice, a 12-year-old African-American boy who was shot dead by police in Cleveland, Ohio, six years ago.

Osaka has worn similar masks, with a different name each time, throughout the tournament, in her effort to encourage the conversation in the United States and beyond about racial inequality and police brutality.

Asked what message she was trying to get across, Osaka told the on-court interviewer: “What was the message that you got? [That] was more of the question.

“The point is to make people start talking.

“I’ve been inside of the bubble so I’m not really sure what’s really going on in the outside world. All I can tell is what’s going on on social media and I feel like the more retweets it gets – that’s so lame, but you know, the more people talk about it.”