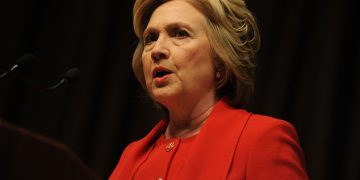 Sept 12 – US Democratic presidential candidate Hillary Clinton has been treated for pneumonia, her doctor says, after she was taken ill at a 9/11 ceremony.

Dr Lisa Bardack said she was diagnosed with pneumonia on Friday and given antibiotics, but had become dehydrated at the New York event.

The doctor’s statement said she was now re-hydrated and “recovering nicely”.

But a campaign official said she has cancelled a campaign trip to California due to the illness.

She was due to leave for California on Monday morning for a two-day trip that included fundraisers and a speech on the economy.

“Secretary Clinton has been experiencing a cough related to allergies. On Friday, during follow-up evaluation of her prolonged cough, she was diagnosed with pneumonia,” Dr Bardack’s statement said.

“She was put on antibiotics, and advised to rest and modify her schedule,” it went on.

On Sunday, video showed her being supported by aides as they put her into her van after she left the 9/11 ceremony in New York early.

Her Republican opponents have queried her physical fitness, with the presidential candidate Donald Trump telling supporters last month she “lacks the mental and physical stamina” to serve as president and fight Islamic State militants.

Last month Dr Bardack said she was “in excellent health and fit to serve as president of the United States”.

She made a full recovery from surgery she underwent in 2012 for a blood clot, the doctor said.

The Clinton campaign has accused opponents of pushing a “deranged conspiracy about Clinton’s health”.

Mrs Clinton is 68. Her Republican opponent Donald Trump is 70.

She then left for her home in Chappaqua, New York, and on Sunday evening Dr Bardack issued the health update.

Earlier on Sunday, the Clinton campaign had responded to news of the incident at the ceremony by saying she had “felt overheated”.

The candidate came to the ceremony fresh from a political storm over comments she made about Mr Trump’s supporters at a fundraiser on Friday.

She had apologised on Saturday for suggesting half of the Republican’s supporters were “deplorables”.

George HW Bush once vomited on a Japanese prime minister. His son fainted in the White House after choking on a pretzel. Franklin Roosevelt hid his serious health conditions, and John F Kennedy never spoke of his debilitating back condition.

The difference between these men and Hillary Clinton, however, is that her “overheating” episode – the apparent result of a case of pneumonia – comes in the home stretch of a presidential campaign where she seeks to tie Ronald Reagan as the oldest person ever elected to a first term as president.

Then there are the conspiracy theories about her health – some advanced by top Trump campaign surrogates – which will become more frenzied. The campaign’s decision to reveal Mrs Clinton’s pneumonia diagnosis only after her very visible struggles two days later will certainly complicate matters.

Donald Trump, age 70, is not clear of medical concerns of course. The only information on his health comes from a haphazardly written note from his doctor.

Sunday’s episode may keep Mrs Clinton off the campaign trail for a few days, then fade away. People who would otherwise have shrugged off her health rumours, however, are now watching her activity more closely.