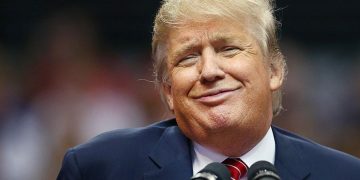 USA, Oct 15 – Two more women have come forward to accuse Donald Trump of sexual assault, in the latest such allegations against the embattled Republican nominee.

Former Apprentice contestant Summer Zervos said the businessman forced himself on her at a Los Angeles hotel and began “thrusting his genitals”.

Kristin Anderson told the Washington Post he reached up her skirt and groped her in a New York club in the 1990s.

The Republican nominee branded the allegations as “lies and smears”.

Ms Anderson, now 46, said the property mogul touched her through her underwear at a Manhattan nightspot when she was a waitress trying to make it as a model.

She said she was “very grossed out and weirded out”.

Ms Anderson said she turned round to find a man sitting on a red velvet couch whom she recognised instantly as the celebrity property mogul.

“He was so distinctive looking,” she told the Washington Post, “with the hair and the eyebrows. I mean, nobody else has those eyebrows.”

She added: “It wasn’t a sexual come-on. I don’t know why he did it. It was like just to prove that he could do it, and nothing would happen.

“There was zero conversation. We didn’t even really look at each other. It was very random, very nonchalant on his part.”

The newspaper said it had approached Ms Anderson after learning of her story through a third party, and she had spent several days deciding whether to go public.

Mr Trump’s spokeswoman, Hope Hicks, said in a statement emailed to the Washington Post: “Mr Trump strongly denies this phony allegation by someone looking to get some free publicity. It is totally ridiculous.”

Meanwhile, Summer Zervos, a former contestant on season five of The Apprentice in 2006, said she was sexually assaulted by Mr Trump after she was invited by him to discuss job opportunities.

Ms Zervos, 41, told an emotional news conference in Los Angeles that she met him in 2007 in a bungalow at the Beverly Hills Hotel, where the businessman greeted her by kissing her on the mouth.

She said he asked her to sit next to him on a sofa where he “grabbed my shoulder and began kissing me again very aggressively and placed his hand on my breast”.

Ms Zervos fought back tears as she said Mr Trump attempted to lead her into the bedroom and “began thrusting his genitals”, even as she fended off his advances.

She said Mr Trump then began talking to her as if she were a candidate for a job interview.

Ms Zervos, who described herself as a Republican, said she was subsequently offered a low-paid job at a Trump-owned golf course.

She was flanked during the press conference by well-known lawyer Gloria Allred, who has previously represented alleged sexual assault victims of entertainer Bill Cosby.

At the time of the alleged assault, Mr Trump was recently married to his third and current wife, Melania Trump.

His campaign said he “vaguely remembers” Ms Zervos, but insisted the meeting at the hotel never happened.

And during a rally in North Carolina on Friday, the Republican candidate said the several accusations were “sick” and fabricated.

“I don’t know who these people are. I look on television, I think it’s a disgusting thing and it’s being pushed, they have no witnesses, there’s nobody around.

“Some are doing it for probably a little fame, they get some free fame. It’s a total set-up.”

Ms Zervos said she was spurred to come forward after Mr Trump denied during last Sunday’s presidential debate ever having committed sexual assault.

He rebutted the suggestion on national television as he was asked about a leaked recording from 2005 in which he is heard bragging that he can force himself on women because he is a star.

Meanwhile, his campaign presented a British man who disputed the account of one of the accusers, Jessica Leeds.

Ms Leeds, now 74, said that when she was 38 Mr Trump groped her on a flight to New York, acting “like an octopus”.

The New York Post reported that Anthony Gilberthorpe contacted Mr Trump’s campaign to counter the claim. In an interview to the paper he said: “I was there, I was in a position to know that what she said was wrong, wrong, wrong.”

Mr Gilberthorpe made headlines in 2014 when he alleged that he had provided underage boys to British politicians for sex parties.

Referring to Ms Leeds in the rally in North Carolina, Mr Trump said: “Believe me, she would not be my first choice, that I can tell you.”

Polls suggest Mr Trump is losing ground in some of the key battleground states against Democratic presidential candidate Hillary Clinton, with just 24 days until the election.