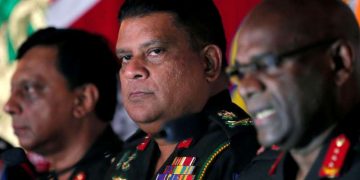 The designation bars entry of Gen.Silva and his immediate family into the United States Washington, February 14 (newsin.asia): The US Secretary of State Mike Pompeo on Friday designated Lieutenant General Shavendra Silva, current Commander of the Sri Lanka Army and Acting Chief of Defense Staff, due to credible information of his involvement, through command responsibility, in gross violations of human rights, namely extrajudicial killings, by the 58th Division of the Sri Lanka Army during the final phase of Sri Lanka’s Civil War in 2009.

The designation means that Gen.Silva and his immediate family members will not be allowed to enter the US.

Pompeo’s announcement put on the State Department’s website, says that this was done “as required under Section 7031(c) of the Department of State, Foreign Operations, and Related Programs Appropriations Act.”

The designation of the Lankan army chief who is considered a war hero in the 30-year battle against Tamil terrorism, especially the US-designated terror group the Liberation Tigers of Tamil Eelam (LTTE), will gravely damage America’s relations with Sri Lanka, where no political party vying for the support of the majority Sinhalese community will welcome the move.

Deemed as a hostile act, the designation will nullify any prospect of the US’ succeeding in getting the Sri Lankan government to sign the Millennium Challenge Corporation Compact (MCC) and the Status of Forces (SOFA) agreement which the US has been very keen on.

The designation will be counterproductive also on account of the fact that it will drive Sri Lanka further into the arms of China which is America’s number One enemy in the Indian and the Pacific Ocean regions.

Section 7031(c) provides that, in cases where the Secretary of State has credible information that foreign officials have been involved in a gross violation of human rights or significant corruption, those individuals and their immediate family members are ineligible for entry into the United States.

“The allegations of gross human rights violations against Shavendra Silva, documented by the United Nations and other organizations, are serious and credible.  His designation underscores the importance we place on human rights in Sri Lanka and globally, our concern over impunity for human rights violations and abuses, as well as our support for promoting accountability for those who engage in such acts.  We urge the Sri Lankan government to promote human rights, hold accountable individuals responsible for war crimes and human rights violations, advance security sector reform, and uphold its other commitments to pursue justice and reconciliation,” Pompeo said. .

“We deeply value our partnership with the Sri Lankan government and the long-standing democratic tradition we share with the Sri Lankan people.  The United States remains committed to strengthening the bilateral relationship with Sri Lanka and helping reshape its security forces to tackle current and emerging threats.  Security cooperation will continue to emphasize respect for human rights as a fundamental component of our training, assistance, and engagements.”

“The United States will continue to use all available tools and authorities, as appropriate, to address human rights violations and abuses around the world no matter when they occurred or who perpetrated them.  Today’s actions underscore our commitment to support human rights, promote accountability for perpetrators, and encourage reconciliation in support of a peaceful, stable, and prosperous Sri Lanka,” Pompeo added.

It was in August 2019 that the then Sri Lankan President Maithritpala Sirisena had appointed Shavendra Silva as his army chief. In October 2019, US officials told Reuters that the appointment of Gen.Silva “will significantly curtail U.S. security cooperation with the country.”