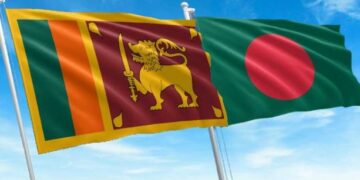 Colombo June 4: The signing of US$ 200 million currency swap arrangement with Bangladesh has sparked a discussion both in the local and regional contexts. On the one hand, it exposed the depth of Sri Lanka’s foreign exchange crisis. On the other hand, it is an instance showcasing the rise of Bangladesh as an emerging economic power in the region.

Internationally, Bangladesh is portrayed in a positive light over its achievement as a relatively young nation which celebrated its golden jubilee of independence this year. Born as a country of food deficit, it has emerged today as a country of food surplus. Today, it is among the top ten in the world in 13 sectors. It is fourth in the rice production, first in Hilsa fish production, second in readymade garments , eighth in remittances , third in vegetables , sixth in potatoes , eighth in mangoes, second in jackfruit and second in goats’ milk, third in freshwater fish, and second in outsourcing.

Still a Least Developed Country (LDC), Bangladesh has come up a long way to become a country of reckoning. It is now well positioned to play a dynamic role in regional connectivity. Its foreign reserves stand at nearly US $ 45 billion, mainly thanks to remittances from its expatriate workers. But, it is as low as US $ 4 billion in Sri Lanka. Sri Lanka’s scramble for US dollars is well understood under these circumstances as a country with a huge bill for debt servicing.

Nevertheless, the currency swap arrangement is another watershed event in strengthening bilateral ties between the two countries. As such, the agreement entails something more than its economic relevance. It bespeaks elevation of bilateral ties. The currency swap is a lifeline to Sri Lanka facing challenges triggered and magnified by the pandemic. The tourism industry which brings over US $ 3 billion foreign exchange to Sri Lanka, was reeling after the serial bombings on April 19, 2019, and to compound the agony, the Covid- 19 outbreak took place. So, for the past three years, there is no recovery for the industry. Export revenue also dropped. So, the help came at a critical time.

In the span of three months of this year, another two important events took place paving the way for the promotion of ties. Bangladesh heeded Sri Lanka’s request to vote against the resolution on Sri Lanka at the March session of the United Nations Human Rights Council (UNHRC). Bangladesh decided on Sri Lanka in this instance independently despite external pressure for it to remain neutral at the UNHRC when the vote was taken. Also, Bangladesh, like Pakistan, withstood pressure from the countries of the Organization of Islamic Cooperation (OIC) and proceeded with its support to Sri Lanka by voting against Resolution 46/1.

Thirdly, the visit of Prime Minister Mahinda Rajapaksa to Dhaka took place in March this year, enabling the two sides to renew ties while exploring fresh areas of cooperation. It was for the participation in the golden jubilee celebration. During talks, both sides discussed the entire gamut of relations.

The Sri Lankan Prime Minister’s visit, the support at the UNHRC and the latest currency swap agreement will now serve as the corner stone of a new relationship. For Sri Lanka, it is an opportunity to sharpen its diplomatic tools to realize strengths in the region.

No doubt, Bangladesh is an emerging economic giant in the region. Its per capita income has grown by nine percent over the past year, rising to $2,227. It has now outstripped India in terms of growth in per capita income. The figure for India is now only US $1,947.

With increased foreign reserves, Bangladesh is now well placed to look at outbound investments and connectivity with the rest of the world. The swap arrangement with Sri Lanka is the first of its kind for Bangladesh. Sri Lanka has sought investments in its bonds from the countries in the region and elsewhere.

As far as connectivity is concerned, Bangladesh has engaged Sri Lanka for a long time about signing a  Coastal Shopping Agreement. It is also eager to enhance cooperation in agriculture, inland fisheries, higher education and pharmaceutical manufacturing.

The two sides signed six MoUs during the visit of Prime Minister Rajapaksa to that country in March, this year.

According to Bangladesh’s The Daily Star newspaper, the MoUs are on Cooperation for strengthening youth development between Bangladesh and Sri Lanka, between Bangla Agricultural Research Council-BARC and Sri Lanka Council for Agricultural Research Policy-SLCARP and between Directorate of Technical Education of Bangladesh and Tertiary and Vocational Education Commission of Sri Lanka on Exchange of Documentation on Vocational Qualifications.

Asked for a comment, Foreign Minister Dinesh Gunawardane said Sri Lanka is keen to resume talks on the coastal shipping agreement with Bangladesh, and follow up on other areas of cooperation. Indeed, the currency swap is a stepping stone to further ties.