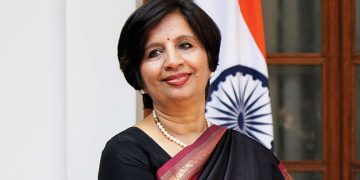 Colombo, January 28 (Sunday Times): In 2017, the former Indian Foreign Secretary Nirupama Rao, a gifted musician, mooted the idea of a South Asian Symphony Orchestra to bring together musical talent from the eight countries in the region, in an effort to unite people through music and promote peace through the medium of melody.

She has worked with the Symphony Orchestra of Sri Lanka (SOSL) to take this idea forward, and on February 7,  coinciding with the 70th anniversary of Sri Lanka’s independence as India already celebrates this great milestone, musicians of both countries will come together on a unifying platform of common passions to showcase a concert of symphonic music.

“Music speaks a universal language that transcends borders. My dream is to see that its magic works in our own region of South Asia, bringing people together, building harmony and mutual understanding. The February concert in Colombo is a first step in that direction. I hope we will be able to take our project to create a South Asian Symphony Orchestra onward and forward, with support from music lovers everywhere. Let the young people of South Asia use the power of music to build peace,” Ms. Rao said in a statement.

The February 7 concert will feature Vienna based, renowned pianist Marialena Fernandes of Mangaluru origin, who will perform Mozart’s Piano concerto, No. 27, under the baton of US-based conductor Viswa Subbaraman who will also conduct the joint orchestra in Beethoven’s Symphony No 07 and Rossini’s Overture to La Cenerentola.

Mozart’s final piano concerto is one of the most subtle and perfect works in the repertory.  Composed a year before his death, the concerto combines the simple elegance one has come to expect of Mozart with a sense of poignancy; the music is at turn luminous and tragic, and though this may simply be a product of an evolving style, one cannot but imagine it hints at a farewell.

Written at the same time as his “Immortal Beloved” letters, Beethoven’s is considered to have the same positive emotion.  The celebratory, exuberant seventh symphony reflects a fleeting but happy stage in Beethoven’s otherwise turbulent life. Beethoven himself called it “one of the happiest products of my poor talents.”

The concert will start with the overture to La Cenerentola by Rossini. This is Rossini’s take on the Cinderella story, and like many of his works, was written at breakneck speed. Though little heard in Sri Lanka, this is one of Rossini’s best-known operas. based on the fairy tale story of Cinderella.

‘Music Beyond Borders will take place at the Ladies’ College Hall at on February 7 at 7.30 p.m. Tickets and box plan are now available at the Lionel Wendt Theatre.