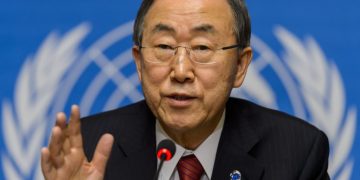 Ban Ki Moon is visiting the island at the invitation of the Sri Lankan government. He is accompanied by  his wife, Ban Soon-taek.

On Wednesday evening, the UN Chief held discussions with Prime Minister Ranil Wickremesinghe and on Thursday and Friday he is expected to meet President Maithripala Sirisena, and other members of the government and of the Parliament.

He will also meet with the Speaker of the Parliament Karu Jayasuriya, Political Party Leaders and civil society representatives.

His Spokesperson, Stéphane Dujarric said that during discussions, the UN Chief is likely to discuss the issue of having foreign judges in Sri Lanka’s domestic accountability process on the war.

The UN chief will also address a number of issues related to justice and accountability.

On Thursday, the Secretary General will travel to the southern town of Galle where he will participate in an event involving youth.

On Friday, the Secretary General will travel to Jaffna in the north, where he is expected to visit a resettlement site.

He will conclude his visit on Sept 2.
SendShare1Tweet1ShareShare