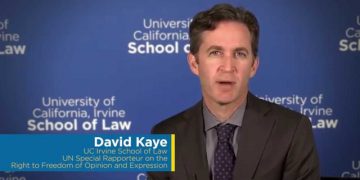 by Editor
in Around South Asia, Around The World, India, Top Story
Reading Time: 2 mins read
3 0 New Delhi, December 23 (Scroll In): A United Nations official has written to Twitter Chief Executive Officer Jack Dorsey, asking him why the platform has begun acceding to India’s requests to act against users posting Kashmir-related content since July 2017.

David Kaye, the special rapporteur on freedom of opinion and expression, cited Twitter’s reports to say that the website had not withheld any accounts or tweets despite requests from the Indian government between July 2016 and June 2017, but had started doing so after that. It seems that Twitter “may have begun to accede to government demands for content and account removals since July 2017”, Kaye told Dorsey in his letter dated December 10.

“The reasons for this shift are unclear,” Kaye said, as he reminded Dorsey of Twitter’s commitment to respect the human rights of its users. He said legal demands to remove content should be “interpreted and implemented as narrowly as possible, to ensure the least possible restriction of expression”. Kaye shared the letter on Twitter on Friday.

Users’ tweets and accounts were withheld when they participated in discussions concerning Kashmir on the social media platform, Kaye wrote in his letter. The affected users received notifications that either their account or tweet was withheld in response to a legal demand or based on local laws.

Kaye asked Dorsey to explain the “legal, policy or other analysis” that led to Twitter to start withholding tweets or accounts related to Kashmir and suspending Kashmiri Twitter handles.

In a series of questions, Kaye asked Dorsey to explain how many removal requests for Kashmir-related tweets or accounts were made and how many such requests were complied with. “What strategies has Twitter adopted to prevent or mitigate content or account removal requests that are inconsistent with international human rights standards, particularly for requests pertaining to Kashmir-related content?” he said.

The portal’s biannual transparency report released on December 13 showed that between January to June 2018, India made 237 removal requests. A list of the content blocked suggests that many of the censured accounts belonged to Kashmiri users.

Twitter said it had withheld two accounts and 23 tweets in response to the demand from the Ministry of Electronics and Information Technology under Section 69A of the Information Technology Act, 2000. Section 69A permits the central government to direct any intermediary to block or remove content from public view, “in the interest of sovereignty and integrity of India”, among other reasons.

(The featured image at the top shows David Kaye, the special rapporteur on freedom of opinion and expression)