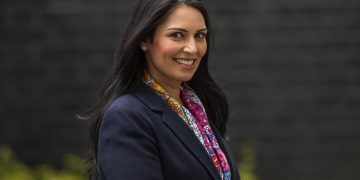 After the Five Eyes security summit, which took place on Monday and Tuesday, Priti Patel said tech firms should not “empower criminals” with their products.

Senior ministers from the Five Eyes partnership, comprised of the UK, Australia, Canada, New Zealand and the US, met tech firms at the London meeting to discuss security issues.

They voiced their concerns about end-to-end encryption, used by messaging apps such as WhatsApp and Telegram, where only the message sender and the receiver can see its content.

The platform itself cannot read the messages, meaning there is no way for investigators to obtain information on criminal activity directly from the firms.

Writing in The Telegraph, Ms Patel called for tech companies to provide a “back door” into such messaging apps, which could be used by law enforcement organisations to tackle crime.

“This is not an abstract debate: Facebook’s recently announced plan to apply end-to-end encryption across its messaging platforms presents significant challenges which we must work collaboratively to address,” she said.

“The use of end-to-end encryption in this way has the potential to have serious consequences for the vital work which companies already undertake to identify and remove child abuse and terrorist content.”

“It will also hamper our own law enforcement agencies, and those of our allies, in their ability to identify and stop criminals abusing children, trafficking drugs, weapons and people, or terrorists plotting attacks.”

Patel’s comments do not mark the first time in recent years a home secretary has attempted to force phone apps into handing over encrypted messages.

In 2017, Amber Rudd came under fire after calling for laws to build back doors into end-to-end encrypted messaging services as a crime-fighting tool.

The plans were met with criticism at the time from Robert Hannigan, a former head of GCHQ, who claimed they would amount to “weakening security for everybody to tackle a minority”.

“Encryption is an overwhelmingly good thing – it keeps us all safe and secure,” he added.

In a joint communique released at the end of the summit, the Five Eyes countries said: “Tech companies should include mechanisms in the design of their encrypted products and services whereby governments, acting with appropriate legal authority, can obtain access to data in a readable and usable format.”

US attorney general William Barr said: “Throughout this week, we have had substantive, frank and positive discussions surrounding our shared duty to protect public safety, including those related to the internet.

“Encryption presents a unique challenge. We must ensure that we do not stand by as advances in technology create spaces where criminal activity of the most heinous kind can go undetected and unpunished.

“Indeed, making our virtual world more secure should not come at the expense of making us more vulnerable in the real world.”

Industry representatives – including executives from Facebook, Google, Microsoft and Twitter – agreed to collaborate with member states on a set of voluntary principles to combat child exploitation, including the live streaming of abuse.

The principles are due to be finalised by the end of September.

Meanwhile, a set of five commitments for the Five Eyes states were agreed by ministers.

They included sharing learning on cyber threats, ensuring security in 5G networks and creating a stronger approach to the misuse of drones.

They also committed to exploring enhanced cross-border information-sharing and to maintain efforts to combat foreign interference in elections.