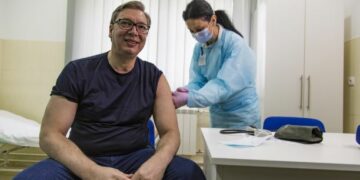 Belgrade, April 13 (Xinhua): “I think that the Chinese vaccines are good for all people, and so we trust this vaccine. We support our country’s cooperation with China in fighting COVID-19,” said Jovanka Adamovic, a Serbian, after receiving her first dose of a Chinese vaccine in the village of Rudna Glava recently.

Back in mid-January, while most European countries were still waiting for the European Union’s procurement process to commence and for European Medicines Agency (EMA) approvals, Serbia’s regulatory body already authorized the use of China’s Sinopharm vaccine.

Like Serbia, several European countries have embraced Chinese-developed vaccines to boost inoculation campaigns that have been impeded by a vaccine shortage, taking cautious steps to ease COVID-19 restrictions for a faster recovery.

As European countries struggle to procure enough doses to fulfill vaccination plans, Serbia, Hungary and a few others have opted to import vaccines from China.

Ukraine has completed laboratory studies of the CoronaVac vaccine (also known as the Sinovac vaccine) produced by Chinese company Sinovac Biotech and is starting to send the vaccine across the country, Ukrainian Health Minister Maksym Stepanov said on his official Facebook page on Monday.

Last week, Serbian President Aleksandar Vucic received an injection of coronavirus vaccine produced by Sinopharm in front of the media in the Rudna Glava village.

“I want to thank our wonderful medical workers for everything they are doing for our people in Serbia and to thank our Chinese brothers,” Vucic posted on Instagram along with a photo of his vaccination.

Hungary has also decided to turn to China for help amid a vaccine shortage resulted from delayed shipments and the limited production capacity of the manufacturers that have the EMA’s approvals.

Hungary has a leading vaccination rate among EU countries thanks to Chinese and Russian vaccines, said Zoltan Kovacs, international spokesman for the Hungarian government.

“Without the Chinese and Russian vaccines, it would not have been possible,” said Kovacs.

The official said that like Hungarian President Janos Ader and Prime Minister Viktor Orban, he was also inoculated with a Chinese vaccine.

“Vaccines are not a political question. All vaccines that are reliable should be used as soon as possible to be able to fight the coronavirus,” said Kovacs, adding that is why Hungary has decided to look to the East.

The Sinopharm COVID-19 vaccine became the first from China to receive a Good Manufacturing Practice certificate in an EU member country, after Hungary this week confirmed that it is of consistent high quality, appropriate for intended use and meets the requirements for authorization.

Hungary started using it for mass inoculation in late February. “We are the first country in the European Union that uses the Sinopharm vaccine,” Tamas Menczer, state secretary from Hungary’s Ministry of Foreign Affairs and Trade, told Xinhua when the nation received the first shipment.

Miklos Rusvai, a professor and virologist at the Hungarian Academy of Sciences, told Xinhua that the Sinopharm vaccine “is unique among the vaccines authorized in Hungary, as this is the only inactivated vaccine that uses the whole virus with all the proteins of the coronavirus itself.”

“It is a very good and very effective immunization method,” he said, adding that the vaccine “will play a significant role in the fight against the pandemic.”

In early April, more than 20 percent of Hungary’s adult population received at least one vaccine dose, and Hungary had twice as many people vaccinated as the rest of the EU, according to media reports.

In Serbia, Dragan Fudulovic, director of the Rudna Glava village’s health center, said that he was “satisfied with the turnout of people for the vaccination, and the Chinese vaccine is applied in most cases.”

“I trust the Chinese vaccine,” Hungarian Gabor Magyari told Xinhua a few moments after receiving the Sinopharm jab in Budapest.

“I don’t care if the vaccine is Chinese or Russian or American. As long as it is good for my health, I am happy to get it,” Magyari said.

According to official figures, China is providing vaccine aid to 80 countries and three international organizations, exporting vaccines to more than 40 countries, and cooperating with more than 10 nations in vaccine research, development and production.

On Monday, Chinese State Councilor and Foreign Minister Wang Yi said that China will stick to solidarity and mutual assistance and join hands with other countries to eventually defeat the COVID-19 pandemic.

The world needs to function as one in order to defeat the pandemic, especially when it comes to vaccination, Jelena Begovic, director of the Institute of Molecular Genetics and Genetic Engineering of the University of Belgrade, told Xinhua.

Begovic said “the initiative from China to gather these countries and make a wall, a battlefield to beat this pandemic, I think it is a great idea, and I think it’s the only way if we want to win this war.”

Commenting on how the Chinese vaccines that are widely used in his country are unavailable in other parts of Europe, Serbian Member of Parliament Zarko Obradovic told Xinhua that “this depicts how the West is closed in its relations with China.”

“The West cannot produce enough vaccines to start inoculating people, and it would be logical if they also attempted to acquire some quantities of vaccines from China,” he said.

“I must say that, unfortunately, COVID transformed into a story about geopolitics and mutual relations. What once again separates China from many other countries is its intention to help everyone, without any other goals but to make a safe and healthy world for all the people,” Obradovic said.