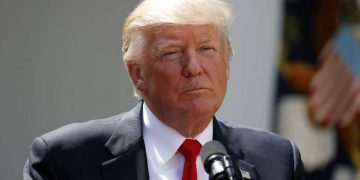 Trump’s bid to reopen US economy meets with resistance

Trump’s bid to reopen US economy meets with resistance With the US Presidential election slated to take place in November this year, Donald Trump, who is aiming at a second term, is eager to kick start the American economy, put money in the hands of the people, and enable the US to face competition from a resurgent post-COVID-19 China.

Trump downplays the virulence of the coronavirus invasion to fit into this agenda, and blames China for the epidemic rather than accept his own foot dragging in meeting the threat.

Backing him is a section of the American working class which wants to go back to work. This is class is heading towards deprivation if not poverty, because of the curbs put on people to prevent the virus from spreading. Pro-opening up protests have taken place in at least 25 US States demanding that Governors ease social-distancing restrictions. Several Republican Governors have said that they will begin to “reopen” their economies in the coming weeks.  The Governors of Georgia, South Carolina and Tennessee have relaxed restrictions.

But public health professionals point out that the pandemic is still  virulent and a second wave could well be on the cards in September-October along with dengue, another killer.

The professionals have also argued that the Trump Administration’s control measures have been far behind requirements. According to them, the majority of the people are not for easing restrictions as the fear of the fear of the virus is greater than the fear of economic deprivation. A  Pew study found that 66% of Americans are more worried that the government will ease restrictions on public activity too quickly. According to a Washington Post-University of Maryland poll, just 10% of Americans expect gatherings of 10 or more people to be safe.

But Trump has been supporting the pro-opening demonstrators through tweets like “LIBERATE MICHIGAN”, “LIBERATE VIRGINIA” and “LIBERATE MINNESOTA”. These States have Democratic Governors and strict social distancing guidelines. Asked if he was concerned about the protesters spreading COVID-19 to others, Trump said “No.  They seem to be very responsible people to me.”

Despite the coronavirus crisis, Trump is eager to meet America’s military needs. Pentagon has asked Mexico to restart the factories that make parts for US weapons. Among the big US defense firms that operate subsidiaries in Mexico are: General Dynamics, General Electric, Honeywell, Lockheed Martin, Safran, Rockwell Collins (now Raytheon Technologies), Textron and  Boeing.

However in a way, Trump and the pro-opening demonstrators have a case. Unemployment has risen to 22 million in the US, wiping out a decade’s economic gain.  But the health professionals’ answer to this contention is that prematurely easing restrictions will cause a big increase  in virus cases that will overwhelm the public health system and force resumption of restrictions, which, in turn, will lead to a bigger  economic cost.  Dr. Anthony Fauci, the top-most US official in charge of infectious diseases, advocates gradual phasing out of restrictions.

Oncologist Ezekiel Emanuel and Nobel Prize winning economist Paul M.Romer  writing in The Atlantic  say that if the goal is to restart the US  economy, the Trump Administration has to step up testing exponentially. Harvard Professor Dr. Ashish K.Jha adds: “Without adequate testing, we don’t know how many are infected, where the virus is spreading, or where the hotspots are. Without widespread testing, we’re on a battlefield wearing blindfolds.”

Emanuel and Romer suggest that four groups of people have to be tested. These are: (1) All health-care workers and other first responders who directly interact with many people. (2) Workers who maintain supply chains and crucial infrastructure, including grocery-store workers, police officers, public-transit workers, and sanitation personnel. (3) Potential “super-spreaders”, namely, asymptomatic individuals who could come into contact with many people. This asymptomatic group would include people in large families and those who must interact with many vulnerable people, such as employees of long-term-care facilities.(4) Those who are planning to return to the workplace.

The experts suggest that focus must be taken away from testing the sickest patients and to people most likely to spread the coronavirus. The Center for Disease Control has recommended priority for testing those with some symptoms, but this should not be the focus, Emanuel and Romer argue. “ If we want to control the spread of COVID-19, the United States must adopt a new testing policy that prioritizes people who, although asymptomatic, may have the virus and infect many others.”

Morgan Stanley, analyst Matthew Harrison and Harvard Professor Ashish Jha say that a minimum of 500,000 tests should be conducted each day, but  Romer is pitching for 20 million to 30 million tests a day.

Emanuel and Romer propose that the US Congress sanction US$ 150 million to five universities that can process up to 10 million tests in a week. “That will unleash a huge amount of latent testing capacity,”  according to them. Another catalyst could be to subsidize businesses that agree to test all their employees as they return to work.  The experts also urge effective surveillance over time, which requires repeated testing.

Emanuel and Romer point out that tests performed in the US have plateaued at about 130,000 to 160,000 a day. “Rather than growing rapidly, the daily number of tests administered in some jurisdictions has even decreased. In New York, for instance, 10,241 tests were performed on April 6, but supply limits forced a huge drop a few days later to 25 total tests.”

“Quest Diagnostics, one of the two biggest firms that run tests, just furloughed 9%  of its workforce. In addition, Deborah Birx, the White House coronavirus-response coordinator, said that, of 1 million test kits distributed for use in Abbott Laboratories’ high-throughput testing machines, only 88,000 had been used. Reports suggest that shortages of supplies and personnel were to blame.”

When someone tests positive, officials should identify close contacts, find them, and test them. To do the tracing, 100,000 to 200,000 additional public-health workers will have to be hired. This type of voluntary contact tracing is labor-intensive and requires some training, but it does not require highly specialized skills. This tracing system should be accompanied by a secrecy or data protection clause.

Contact tracing apps, which the Chinese used successfully to contain the spread of the virus, are now being developed in the US. Apple and Google are collaborating to launch apps to assist contact tracing. These can notify smartphone users if they have come into proximity with people infected by COVID -19.

If China cannot be the model to emulate, the US can emulate democratic South Korea. South Korea, which was hit by the virus grievously, managed to conquer it by testing on a vast scale very early. This helped identify infected people and provide them with medical facilities. Unlike China, South Korea did not opt for a complete lockdown. After controlling the epidemic quickly and systematically, it held its parliamentary elections on April 15.