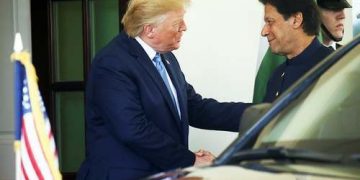 The White House statement came amid fresh tensions between India and Pakistan, following the Narendra Modi government’s move to scrap the special status accorded to Jammu and Kashmir last Monday. The matter even reached the United Nations Security Council (UNSC), which held a closed-door meeting to discuss it earlier in the day.

Pakistan Foreign Minister Shah Mehmood Qureshi claimed that the two had a “cordial conversation”, and agreed to keep in touch over the Kashmir dispute. “Prime Minister Khan conveyed Pakistan’s concern on recent developments in Kashmir and the threat they pose to regional peace,” he was quoted as saying by state-run Radio Pakistan.

The two also reportedly discussed Afghanistan, where the United States is engaged in talks with the Taliban.

Shah Mehmood Qureshi later said in a press conference that Pakistan contacted four of the five permanent members of the UNSC to gain their support for its cause. Efforts were also made to contact the French President, he added.

The UNSC’s rare closed-door meeting was held on the request of China, a proclaimed ally of Pakistan. Discussions were open only to its five permanent members and 10 non-permanent members, and an appeal by Pakistan to allow the participation of a representative was rejected.

According to UN records, the Security Council had last discussed the dispute over Jammu and Kashmir in 1965.

Meanwhile, Pakistan Prime Minister Imran Khan on Thursday once again questioned the international community’s silence on Indian-occupied Kashmir and warned that should ethnic cleansing of Muslims take place in the region, there would be severe repercussions in the Muslim world.

The premier’s message came as the curfew and communications blackout imposed by New Delhi in occupied Kashmir entered its 12th day. Thursday (August 15) is also India’s Independence Day, which is being observed as Black Day across Pakistan to protest the brutalities and human rights abuses in occupied Kashmir.

Read: ‘RSS ideology of Hindu supremacy will lead to suppression of Muslims in India and to targeting of Pakistan’

“In IoK, 12 days of curfew, presence of extra troops in an already heavily militarised occupied territory, sending in of RSS [Rashtriya Swayamsevak Sangh] goons, complete communication blackout — with the example of Modi’s earlier ethnic cleansing of Muslims in Gujarat,” wrote the premier on his Twitter account, the display picture of which was a plain black image.

“Will [the] world silently witness another Srebrenica-type massacre and ethnic cleansing of Muslims in IoK?” he asked. “I want to warn the international community if it allows this to happen, it will have severe repercussions and reactions in the Muslim world, setting off radicalisation and cycles of violence.”

The decision to mark India’s independence day as Black Day was taken at the National Security Commit­tee meeting, chaired by Prime Minister Imran, last week in the wake of the Indian move to revoke Art­icle 370 that gave occupied Kashmir an autonomous status and to split the held Valley into two territories.

Pakistan has strongly condemned India’s move to annex occupied Kashmir and the imposition of an unprecedented security lockdown in the area.

A day earlier, the premier celebrated Pakistan’s Independence Day in Azad Jammu and Kashmir to express solidarity with Kashmiris on the Indian-occupied side. In a speech in its legislative assembly, he had warned India against any attack on AJK to divert attention from its human rights violations in the Himalayan region.

“Since the Kashmiris are equally battle-hardened and they also do not fear death, Modi should not harbour any illusion,” he said. “You [India] can no more keep the valiant Kashmiris enslaved.”

Read more: ‘Every brick will be countered with a stone,’ PM Imran warns Modi against action in AJK

The prime minister, during his address twice pledged to take up the responsibility of raising voices of the Kashmiris at every forum of the world: “I will be the ambassador of your cause across the globe.”