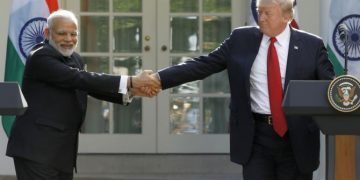 New Delhi, January 4: The highly disparaging remarks to by the US President Donald Trump on Wednesday regarding Prime Minister Narendra Modi and India’s role in Afghanistan come as a shocking revelation. Trump was talking to the press following his first cabinet meeting of 20i9 at the White House in Washington. No Indian PM has been reduced to look silly like this by any American president in history.

Trump’s remarks came in the course of his rambling speech regarding the failure of the war in Afghanistan. He spoke every bit as an embittered man who realizes that the war has been lost. Part of the reason why he summarily put Modi on the mat could have been that Trump also realizes the great urgency of extracting Pakistan’s cooperation in the Afghan endgame. Trump’s thesis was that foreign leaders take America for a ride.

In this vein, Trump mocked Modi for funding a library in Afghanistan under Indian aid and bragging about it repeatedly in private conversations. (Trump apparently mistook for a library the Indian-built parliament building in Kabul, which Modi inaugurated in a grand ceremony on Christmas Day in 2015.) Anyway, Trump claimed that Modi was “constantly telling me he built a library in Afghanistan.” He then rubbished Modi’s vanity, saying, “You know what that is? That’s like five hours of what we spend (in Afghanistan.) And we’re supposed to say (to Modi), ‘Oh, thank you for the library’. I don’t know who’s using it in Afghanistan.”

This is the first time the US belittled the Indian assistance to Afghanistan, which is estimated to be close to 2 billion dollars. The American mantra has been that India was rendering invaluable help to Afghanistan. But now that the war is about to end, we are probably getting a candid version of what the Americans really thought of the quality of the Indian aid. Yet, Trump has forgotten that in his own Afghan strategy of August 2017, he had given fulsome praise for India’s role in Afghanistan.

Elsewhere, Trump said that India had a free ride in Afghanistan – like Russia and the Gulf states – because the US was fighting their war against terrorist groups. Therefore, Trump said in a snide remark that it is for India and Russia to do the fighting in Afghanistan. But ee recalled that the Russians once tried to fight extremist groups in Afghanistan and failed and the Soviet Union went bankrupt as a result. The outcome was that the USSR “shrunk” into the Russian Federation.

Trump asked with indignation: “Why isn’t Russia, India, Pakistan there?” Why should America be there, “which is 6000 miles away?” He bemoaned that the Pentagon “didn’t do a good job” in Afghanistan. Referring to the former Defence Secretary James Mattis, he noted, “I am not happy with what he did in Afghanistan.” Trump alleged that he provided for a generous budget for the Pentagon but the result in Afghanistan is “not too good.”

Interestingly, Trump hinted that Pakistani Prime Minister Imran Khan is delivering in a big way to help the US end the war. Trump disclosed, “I look forward to meeting the folks from the new leadership in Pakistan. We will be doing that in not-too-distant future.”

Clearly, Trump has taken note of the sea change in the Pakistani stance lately on Afghanistan after Imran Khan came to power, especially Imran Khan’s changed position that in some form – may be, in some reduced form – the US military presence should continue in Afghanistan for a conceivable future. Simply put, the US and Pakistan are re-bonding again as ‘natural allies’ over Afghanistan.

Trump feels gratified that Pakistan has delivered the Taliban, finally, to the negotiating table. No doubt, the revival of the US-Saudi Arabia-UAE-Pakistan caucus to finesse the Taliban’s role in the future Afghan political scenario meets with Washington’s requirement. For Trump, the priority is that the US must somehow end the 17-year old war in Afghanistan before his campaign gets under way for the presidential election in the US next year.

Arguably, Trump’s acerbic remarks about Modi contained a subtle warning against any Indian attempt to be a ‘spoiler’ in the emergent scenario. On the other hand, Imran Khan becomes an irreplaceable partner for Trump today. We may expect a state visit – or at least an official visit – by Imran Khan to the US in the near future in return for the invaluable service he’s rendering to the US’ regional strategies.

On the geopolitical plane, things are falling in place in a familiar pattern. The US seeks transactional relationships and in the immediate future in the South Asian region Pakistan is of greater use. Evidently, Indian analysts have been, as usual, daydreaming about the “Quad” and what not.

Trump’s fascination for India has been all about Modi’s utility for the ‘America First’ project. Besides, Trump probably sees Modi now as a brunt-out case. Indeed, the Western press increasingly casts doubts on Modi’s chances of returning to power in the 2019 poll. (See a commentary by the US government-funded Voice of America titled India’s Modi Facing Tough 2019 Election Year)

(This blog appeared in Newsclick.)