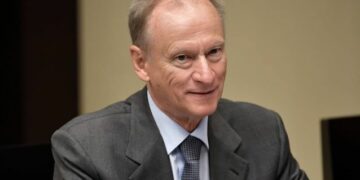 Colombo, November 22 (newsin.asia): The Secretary of the Security Council of the Russian Federation Nikolai Patrushev called on President Gotabaya Rajapaksa at the Presidential Secretariaton Monday.

Patrushev has been Secretary of the Security Council of the Russian Federation since 2008, having previously served in the Committee for State Security (KGB) of the Union of Soviet Socialist Republics (USSR) and of the Federal Security Service of Russia.

Bilateral relations between Sri Lanka and Russia will mark the 65th anniversary on 19 February 2022. President Rajapaksa said that Mr. Patrushev’s visit will further strengthen the ties between the two countries.

The President thanked Mr. Patrushev for providing 5,000 doses of Sputnik vaccines, for Russia’s assistance in making the Covid-19 vaccination drive a success, and for the 49,379 Russian tourists who arrived in Sri Lanka last year even during the Covid-19 epidemic.

Sri Lanka wishes to expand its export product range under the Russian GSP scheme. The President said Russian investors are invited to invest in the Colombo Port City, and in energy, pharmaceutical, ICT, agriculture, infrastructure, oil and gas exploration, and logistics sectors.

President Rajapaksa commended Russia’s role as a Permanent Member of the UN Security Council in promoting the interests and concerns of developing countries in the areas of peace and security and expressed gratitude for Russia’s strong support to Sri Lanka in the UN Human Rights Council sessions.

Russian Ambassador in Sri Lanka Yury Materiy, Deputy Secretaries of the Security Council of the Russian Federation Aleksander Venediktov and Oleg Khramov, Secretary to the President P.B. Jayasundera, Principal Advisor to the President Lalith Weeratunga, Foreign Secretary Admiral Prof. Jayanath Colombage and a team of Russian diplomats were also present at the meeting.