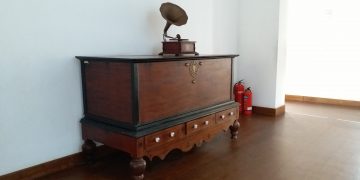 As you walk into the spacious corridors of the first floor of Independence Square Arcade in Colombo, the din from the main road outside gradually fades into a soliloquy of architectural grandeur.

A covered verandah or colonnade leads to the popular Independence Arcade movie theater across the right hallway over a wooden floor. The subtle and slanting rays of the sun are evenly distributed at all times of the day across the floor through the pyramidal glass skylight on top and large Victorian windows adorning the right walls.

This further highlights the spacious hallways on either side of the staircase leading to the first floor. Proceeding across these corridors on the first floor, it is almost impossible to miss out on the heavy wooden chests kept on both sides.

Sitting silently atop this antique wooden chest is a small piece of history- a gramophone with a 10 inch and 78 rpm vinyl disc on top of the 1943 famous Hindi movie- Kismat (Fate).

Often, standing oblivious to the hastily moving rows of people frequenting the movie theater on the same floor, the contents of this small disc instantly connects it to the activities of these movie theater. This tiny piece of vinyl further connects the cultural diversity of the region through the long strain of popular cultural history and the Hindi film industry.

Encouraging many new genres, artists, ideas and popular movements across the sub-continent of not only India- but the whole of South Asia and beyond- the more than 100 year-old Hindi film industry has a significant contribution in molding thoughts and identities and recreating the art of storytelling.

The Hindi movie Kismat is one such historical example of the creation of a platform for many superstars to follow in later years and establishment of a new genre amidst popular culture as well.  Kismet has in it the first superstar of Hindi films- the Late actor Ashok Kumar.

Standing as a silent sentinel today on the first floor of Independence Arcade Square, the vinyl acts as a connecting link between the modern movie theatre and a platform and benchmark created 75 years ago in the Hindi film industry.

In December 2017, the Arcade celebrated a platinum jubilee of this benchmark- along with the 107th death anniversary (December 10) of Ashok Kumar.

Also described in the website is how the renovation highlights and speaks of the “expressions of Freedom, which would present a tangible real-life experience to the multitude of people residing and visiting the capital city of Colombo.”

Thus, adoring the many nooks and crannies of the Arcade are artifacts to recreate this sense of joy and exuberance. With an attempt to recreate an ambience that greets and invites visitors within its living space and beautiful surroundings, the Arcade is a true masterpiece of historical reflection and its continuity in present times. Adding to the many artifacts which contributes to this recreation is this tiny vinyl of Kismat.

The name- Kismat is highlighted in the vinyl in golden-brown on a faded red HMV label.Manufactured by The Gramaphone Company of India Limited, the disc holds the production number-‘N. 26192’- in the centre and the name of the famous song in Hindi and Urdu- “Dheerey dheerey aa re badal” (O Clouds Come Gently…Gently…) below it.

The name of the singer, the production house, music composer and lyricist are also mentioned. ‘Rani’, Bombay Talkies Ltd., Anil Biswas and Pradeep respectively. The reverse side of the same vinyl holds another famous song from the same movie- “Dur hato ai duniya walon” (Beware- the Rest of the World), a patriotic song sung one year after the 1942 Quit India movement against the British.

Faintly visible with heavy marks of the stress of time showing on the faded label, the names however speak of a historical time from the popular genre of Hindi film industry.

Released in 1943- Kismat had a star cast that spoke of many notable actors, including Ashok Kumar, Mumtaz Shanti, Shah Nawaaz, Moli, P.F. Pithawala, Chandraprabha, V.H. Desai, Kanu Roy, Jagannath Aurora and Prahlad. The movie also happens to be the first Hindi blockbuster to gain a net gross of INR 632 million at the box office.

When most modern Hindi movies boast of crossing the ‘crore’ (10 million) budget category and is lauded for their financial collections in present times, in 1943 such an amount was not only staggering but unimaginable. Creating history in the process, Kismat also helped to provide a platform and establish the Late and legendary actor  Ashok Kumar as the first superstar of Hindi cinema. Interestingly enough, it was also the first time that the concept of an anti-hero was established in Hindi cinema, so far being portrayed eloquently only by the villain and never the main protagonist.

Premiering at Mumbai’s Roxy cinema to an applauding audience in January 1943, Kismet was an instant hit and even went onto run across a lengthy 192 weeks at Kolkata’s Roxy cinema. The record was broken 32 years later by Ramesh Sippy’s  Sholay.

The popularity of Kismat lies in the fact that it has often been described as the film which created many benchmarks. Along with a never-before-attempted idea of casting the main protagonist in a negative character, the movie reflected the socio-cultural tumult of the times. Financial difficulties and social problems of the war period had many novelists, authors, poets and musicians reflecting their ideologies through their respective works of art.

The first anti-hero of Hindi cinema, being portrayed by Ashok Kumar,carried this message with elan. Carrying the screen name of Shekhar, the main protagonist was shown to never deter from making a fast buck. The anti-hero continued his activities without a care for the world till he meets the leading lady, a handicapped Rani. Inspite of the change of heart, Shekhar  undergoes various ordeals and is finally rewarded with not only his fair lady, but a family fortune as well.

Ashok Kumar’s stylistic representation also changed- being influenced by various Hollywood actors, especially Humphrey Bogart. Thus, came Ashok Kumar’s initial personification with the cigarette dangling from his lips. This went on to become his trademark for decades to come as he puffed his way through extremely successful Hindi movies later on, namely, Howrah Bridge, Sangram and Night Club. It was borrowed by a number of actors in later decades and is an often repeated even in modern Hindi cinema.

Today, as the fragrance of buttered popcorn emanates from the modern movie theatres and a row of cinema admirers throng to catch the next show, the tiny vinyl stands as a mark of 75 years of glorious representation of an important part of popular culture. It speaks modestly of a symbol of history in modern times and also shows how we can find stories from history of celebrated epochs that paved way to imaginations, creativity and storytelling down the years.

(Author Dr.Lopamudra Maitra Bajpai is an Indian visual anthropologist who had worked at the SAARC Cultural Center in Colombo. She can be contacted at [email protected])