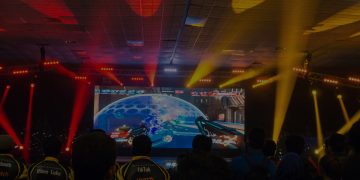 The rise of E-Sports in Sri Lanka

The rise of E-Sports in Sri Lanka Colombo, 28 Feb (newsin.asia) – E-Sports is the fastest growing sport in the world.
To find out more about eSports in Sri Lanka we spoke to Raveen Wijayatilake (CEO InGame Entertainment Pvt Ltd) for an insight.

Introduction to Esports:
Walking into the SLECC one weekend in December, the 40,000 square foot hall is abuzz with activity. Thousands of youth are gathered in front of hundreds of screens of various sizes, cheering-on rows of seated gamers hyper-focussed on the monitor in front of them. A large LED wall is positioned on the far side of the hall, framed by professional lighting that you could mistake for a high-end music show. An audience follows each action taking place on the screen with intense interest – it is a Sri Lanka vs India League of Legends match happening on the main stage. A Sri Lankan player pulls off a daring kill on his Indian opponent and the crowd cheers as the atmosphere turned electric with a celebratory light show and applause, while commentators call out the action in the background. The winner of this tournament will take home over Rs. 500,000! This is Electronic Sports.

Esports is the competitive play of video games – a movement considered the sport of the future. With viewership numbers increasing at record speeds, Esports has been labeled the fastest growing sport in the world. This claim is true for Sri Lanka as well, with thousands of youth taking part in high-intensity tournaments boasting large prize pools.

Esports has been growing steadily for the past 10 years in Sri Lanka with the first large-scale tournament – the Sri Lanka Cyber Games – being inaugurated in 2008 at the BMICH. The 11th edition of the event was held on the 7th, 8th and 9th December 2018 at the Sri Lanka Exhibition & Convention Center. It also played host to the first IGE South Asia Cup in the region – an invitational 5-nation League of Legends tournament with a prize pool of USD 5,000. Teams from Bangladesh, India, Maldives, and Pakistan flew down to Sri Lanka in order to take part in the 3-day championship.

The Play Expo event which consists of a number of mini-events, including the Sri Lanka Cyber Games and multiple Esports events by Dialog, featured a prize pool of Rs. 5,000,000 making it one of the largest prize pools for a sporting event in Sri Lanka.

Globally, Esports tournaments are best known for their large prize pools – with events like “The International” – a Dota 2 tournament organized by Valve – boasting a prize pool of USD 25 million in 2018. This is bigger than prize pools for the ICC Cricket World Cup, the NFL etc. Esports is also showing a viewership growth trend that will position it firmly as the most watched sport in the world by 2024 – the year that advocates are hoping that it’ll be accepted as an Olympic Sport.

Olympic Councils globally have been observing the steady growth of Esports and started to include Esports titles into traditional sporting events such as the Asian Games, The Asian Indoor and Martial Arts Games and the South East Asian Games. The South East Asian Games organized by the Olympic Council of Asia has included Esports as a medal event – which means an Esports athlete representing their nation can win a medal for their country by playing video games. The Asian Games held a demonstration Esports event at the last games in 2018 and will be including Esports as a medal event in 2022.

The Sri Lankan Esports scene is governed by the Sri Lanka Esports Association (SLESA), established in 2010 by Esports pioneer Gamer.LK. SLESA consists of 10 Esports clans and organizations working together to establish and enforce rules and regulations for the sport. The members of the association are as follows:

With Esports in Sri Lanka gaining more funding and viewership, 2019 is slated as the year the sport becomes a household name. The professional Esports scene is set to grow significantly with more professional leagues with large prize pools scheduled for the year.