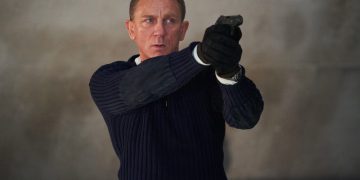 The next James Bond movie, "No Time to Die," has been pushed back from April to November amid coronavirus concerns. Daniel Craig as James Bond in "No Time to Die" MGM

March 5 (Business Insider) – The 25th James Bond movie, “No Time to Die,” has hit another roadblock.

The movie’s release date has been pushed back from April to November “after careful consideration and thorough evaluation of the global theatrical marketplace,” the studios MGM and Universal, and franchise producers Michael G. Wilson and Barbara Broccoli, announced on Tuesday.

The delay comes amid concerns over the coronavirus, which has spread to at least 70 countries and killed more than 3,000 people. The movie’s China premiere had previously been canceled.

This is the third time “No Time to Die” has been postponed. It was originally set for release in North America in November 2019, but was delayed until February, and then again to April, as Cary Joji Fukunaga replaced Danny Boyle as director, and “Fleabag” creator Phoebe Waller-Bridge came on to polish the script.

The coronavirus has dealt a huge blow to the China box office as the region’s 70,000 theaters remain closed due to coronavirus concerns and Hollywood has been feeling the effects, too. Production for the next “Mission: Impossible” movie has shut down in Italy and Disney’s costly “Mulan” remake, which was produced for $200 million, was expected to be a major hit in China.