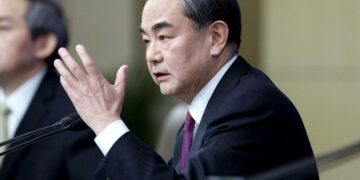 Colombo, January 5: The Chinese Foreign Minister, Wang Yi, is on a swing through the Indian Ocean Region (IOR) from January 4 to 9. Wang’s trip spans the IOR from the East African Coast through the Maldives and Sri Lanka.  The countries he will be visiting, namely, Eritrea, Kenya, the Comoros, the Maldives and Sri Lanka, all face a financial crisis and have debt issues to be addressed. As for China, it has to meet a mounting challenge from India and the US in the IOR.

Eritrea joined China’s Belt and Road Initiative (BRI) in November 2020. The BRI in Eritrea gives China a foothold in the strategic Horn of Africa and the Red Sea. But to pursue its economic and strategic interests, China needs peace in this troubled region. Tim Zajontz, research fellow at the Centre for International and Comparative Politics, Stellenbosch University, told the South China Morning Post that Wang’s Eritrea visit is a “clear sign that peace and stability in the Horn of Africa is paramount to Beijing.” In November last, Wang had called upon Ethiopia and Eritrea to go for a peaceful resolution of the Tigray conflict.

Chinese investments in Eritrea’s infrastructure sector potentially includes the Red Sea ports of Massawa and Assab, though it is not clear if they might be used as bases.

In Kenya, Wang is likely to seek to ensure that huge Chinese loans do not become a prominent political issue ahead of the Kenyan general elections in August 2022. Among Chinese mega projects in Kenya is a railway line from Mombasa to Malaba at the border with Uganda. China’s Export-Import (Exim) Bank funded the first leg of the railway from Mombasa to Nairobi, at US$ 3.2 billion, and an extension to Naivasha for another US$ 1.5 billion. But the project stalled in 2018 because  the Chinese bank asked Kenya to do a study to prove its commercial viability.

Nairobi could ask Wang to restructuring its debt, but Chinese lenders have been reluctant to offer debt relief. Wang Yi would have to take up issues of the infrastructure projects during his talks with Kenyan leaders.

From Kenya, Wang goes to the Comoros, an archipelago straddling the northern mouth of the Mozambique Channel between Mozambique and Madagascar. Comoros is dependent on external aid and has been depending primarily on China since 2014. China has major infrastructure projects in the archipelago.

The Comoros lie astride shipping lanes that carry oil to China, and explorations in the Comorian EEZ are likely to yield oil and natural gas which would help China’s quest for diversifying its sources of fossil fuel imports. The waters around Comoros are important fishing grounds that could bolster China’s seafood cache, writes Maithreyi Shilpa Kishor of the Observer Research Foundation.

On the geopolitical plane China is wary of India’s presence in Madagascar, Mauritius and Seychelles. “China’s growing ties with Comoros can be seen as an effort to mitigate India’s footprint in the region. The strategic location of Comoros at the mouth of the Mozambique Channel gives China a legitimate reason to maintain a presence there.” Kishor points out.

China had forgiven Comorian debt in November 2018 and had pledged  further investments in connectivity projects to help President Azali Assoumani realise realize his vision of taking the  Comoros out from the list of Least Developed Countries by 2030, she says.

For the Maldives too, high debt remains a problem. The country’s public debt stood at US$ 5.6 billion at the end of March 2021. The Maldives’ debt to China is estimated to be 78% of its total external debt, but financial analysts see no cause for “undue alarm” over it. Nevertheless, the Ibrahim Solih government has sought to renegotiate its debt to China.

However, China’s problem in the Maldives is essentially political. A section of the ruling Maldivian Democratic Party (MDP) led by parliament Speaker Mohamad Nasheed has been pressing President Solih to throw out the Chinese and latch on to India and the US. But Solih is seeks a balanced approach though he came to power with the blessings of India and the US. Since the pro-West Nasheed is threatening his power base, Solih is moving closer to China.

While expressing gratefulness to India for its economic support, Solih told The Hindu in an interview in January: “China is a close and valued partner of the Maldives. We welcome their participating in the G20’s Debt Service Suspension Initiative, and appreciate that we have been able to positively engage with them to renegotiate the terms of ongoing development assistance and economic projects, in a manner mutually beneficial to both countries, and consistent with our friendly relations.”

Recently, the Solih government entered into a deal with a Chinese company Sino Soar Technologies to supply solar power to 12 islands. Sino Soar was previously removed from a project to set up solar plants in three islands off North Sri Lanka at the instance of India which said that the project was a security risk for it.

Sri Lanka is seriously affected by debt and could ask Wang for relief. China is the second-largest foreign lender to Sri Lanka, but it accounts for just over 10% of the overall debt. Most of the loans had been taken by from the international market on commercial basis. Hence the crisis.

As far as China is concerned, Sri Lanka had obtained a Foreign Currency Term Financing Facility (FTFF) of US$ 1 billion from the China Development Bank (CDB) in 2018, and another US$ 500 million in March 2020. In early April 2021, Sri Lanka signed an agreement with the CDB to obtain US$ 500 million as an FTFF. Sri Lanka could also draw on a Chinese currency denominated swap with the People’s Bank of China for US$ 1.5 billion, that could be used for paying for imports from China.

However, the recent rejection of a consignment 20,000 mt of Chinese organic fertilizer on quality issues by the Sri Lankan authorities had soured Sino-Lankan relations. But both sides appear to have decided not to upset the traditionally friendly ties.

Days before Wang’s visit (January 8-9) the fertilizer issue was resolved by negotiations. The Colombo Commercial High Court has now asked the State-owned Peoples’ Bank to pay the Chinese company its due on the grounds that the parties to the dispute had settled the matter among themselves and the Chinese company had agreed to deliver a fresh consignment of organic fertilizer of the required quality.

To smoothen relations, the Chinese embassy released an article on the historic Sino-Lankan “Rice for Rubber Pact” signed on December 18, 1952.  The pact provided the foundation for good Sino-Lankan ties.

It is not clear if the Chinese Foreign Minister will extend further financial help or reschedule debt repayment to help Sri Lanka manage the severe dollar shortage. Sources say that Wang will not volunteer assistance (because of the ugly fertilizer issue which still hurts the Chinese) but he might respond favorably if assistance is sought by Sri Lanka.

Be that as it may, Wang is expected to take steps to strengthen relations with Sri Lanka through new investments, especially in the Colombo Port City (CPC) built by a Chinese company. Some top Chinese financial companies are expected to invest in the CPC, according to the Lankan envoy in Beijing Dr.Palitha Kohona. Recently, the Colombo Port City authorities had taken Lankan Foreign Minister Prof.G.L.Peiris on a tour of the facilities there to help him seek foreign investors. READ MORE