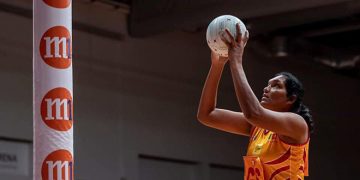 Tharjini Sivalingam: The 40-year-old tallest netballer in the world who almost never misses

Tharjini Sivalingam: The 40-year-old tallest netballer in the world who almost never misses July 15 (Telegraph.Co.UK) – There is a natural stoop when Tharjini Sivalingam goes to shake someone’s hand. It is something she has grown accustomed to doing whenever she lowers her 6-foot 10-inch frame to that of a more conventional stature.

Sivalingam’s extraordinary height has shaped almost everything in her life. It prompted children to point and laugh in her youth, it gave her a reason to expand her horizons far beyond Sri Lanka’s remote Jaffna Peninsula, and it now allows her to travel the world. It has also earned her the title of tallest netballer on the planet.

For Sivalingam, her height is everything and for Sri Lanka, Sivalingam is everything. In their opening World Cup match on Friday morning, she scored a phenomenal 44 of 45 shots attempted. Her fellow goal attack did not even try her luck until the second half. Why bother when the woman standing under the post almost never misses?

Yet most astonishing of all is how she came to be here; how the woman who stands a strong chance of being crowned the most successful shooter at the World Cup – just as she was in 2011 – is a 40-year-old who never even picked up a netball until her twenties.

The path to this point begins on a vegetable farm in the furthest northern tip of Sri Lanka, although it does not remain there for long. Born into a Tamil family, Sivalingam’s life was quickly turned upside down as a young girl when she was caught up in the civil war between the Tamil Tigers and the Sri Lankan government.

Their home destroyed, the family learned to survive as best they could without electricity or running water. “I was very poor and we were moving, moving, moving,” she tells Telegraph Sport in broken English. “It was a very difficult time.”

Although her height – which comes from a hormonal imbalance that caused her to continue growing into her twenties – was immediately apparent, her sporting experience was limited to launching a shot put as far as she could.

Faced with people staring and making cruel taunts, she shrunk into herself. It is still evident in her demeanour today – her cheery, kind face belying her introverted nature.

Only when she moved to study economics at university on Sri Lanka’s east coast did she step onto a netball court for the first time. Within months she was brought into the national set-up and relocated to Colombo, where she was tasked with learning Sinhalese to converse with her new team-mates.

It was in her new job at Seylan Bank in the capital that she met Thilaka Jinadasa, who is now in her second stint as Sri Lanka’s head coach.

“When she first came to Colombo she didn’t speak Sinhalese,” said Jinadasa. “Just imagine how hard it must have been for her.

“She was very shy and didn’t want to do any strength work because she had this extraordinary height so she didn’t think she could fit into any of the machines.

“I told her I could organise it for her, so she started believing in me and following me.

“When she came to the 2005 Asian Championships she was on the bench because she was very slow. I intended to give her confidence, to show her she just needs intelligence on the court.”

It sounds a simple enough undertaking, but Sivalingam was being asked to learn the type of netball basics that most girls are taught at school: how to move, where to stand, how to land correctly.

“She had never played netball so she didn’t have that skill,” says Jinadasa. “Sometimes she still makes basic fundamental errors because of that.”

Her physical advantages were enough to overcome her lack of experience. At the 2011 World Cup she scored 290 of her 296 shots – a frankly ludicrous 98 per cent shooting accuracy.

Yet by the following edition in 2015 a new coaching regime had bizarrely cast her aside. “Administration problems,” says Sivalingam, by way of simple explanation. Sri Lanka finished last in her absence.

Unwanted by her national side, she became her country’s first professional player when offered a contract to play in Australia’s state netball league – the third tier of the sport – for City West Falcons, Victoria’s most successful team. She has now spent three years there, boarding with her coach and former Commonwealth Games champion Nicole Richardson, while developing her game into her late 30s and early 40s.

When Jinadasa was reappointed at the Sri Lankan helm last year she had no hesitation in bringing her star shooter back into the fold, no matter that she was twice the age of some of her team-mates.

Her worth was instant. She was crowned player of the tournament in Sri Lanka’s successful Asian Championships campaign in September, although she was powerless to prevent her side slipping to a 79-49 defeat against World Cup newcomers Zimbabwe in Liverpool on Friday.

Her ambitions in what she confirms will be her last World Cup remain as lofty as ever: “I want to be the best shooter in the world again.”