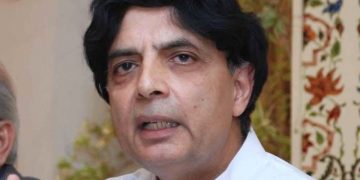 Mardan, Pakistan, (NIA):   The four suicide bombers who stormed Peshawar’s Christian Colony a day earlier were foreigners but it was yet to be ascertained which countries they belonged to, Interior Minister Chaudhry Nisar Ali Khan said on Saturday.

“We had intelligence alert about a possible militant attack in three to four areas in Peshawar,” Nisar said during a press briefing in Mardan, Dawn reports.

Terrorists struck Mardan and Peshawar on Friday, killing 14 people and injuring 49 in a day that could have ended with a higher number of deaths had four of the suicide bombers not been killed before they could set off their explosives.

“Pakistan’s security forces have won a difficult war but there is still more to be done to eradicate terrorism entirely,” Nisar said, adding that “previously there were attacks every other day, now they happen in months”.