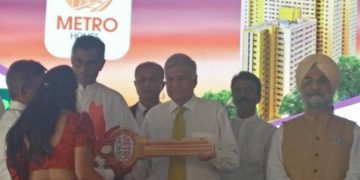 Colombo, August 1 (newsin.asia): The first phase of the Slave Island Redevelopment Project named “Metro Homes” executed by the Tatas of India, was completed on Thursday. Sri Lankan Prime Minister Ranil Wickremesinghe handed over completed houses to 626 families. 114 shops were handed over to shop owners. The families and the shop owners had previously lived and done business in that area

They had been temporarily displaced to modernize and rehabilitate the congested inner-city area of Slave Island. The new Metro Home houses are well-built with modern amenities. The total cost of the project is Rs. 7000 million or US$ 40 million.

Prime Minister Wickremesinghe thanked the Government of India for its development partnership over the years. He specially mentioned the visit of Prime Minister of India Narendra Modi to Sri Lanka after the Easter bomb attacks, which provided a big boost to Sri Lanka’s confidence. Wickremesinghe added that he looked forward to further strengthening connectivity and people-to-people ties between Sri Lanka and India.

In his inaugural speech, High Commissioner Sandhu thanked the Government of Sri Lanka for giving the status of “Strategic Development Project” to this housing project. The High Commissioner pointed out that this was yet another manifestation of the confidence that Indian firms have in the Sri Lankan economy. He stressed that India and Sri Lanka are going through a phase of rapid urbanization and there was a need to ensure smart development of their cities with due emphasis on ‘inclusivity’ and ‘sustainability’.

The Tatas are a well-known name in Sri Lanka and are a global enterprise with an annual revenue of more than US$ 100 billion with operations in more than 100 countries across the globe.  They have had a presence in Sri Lanka since 1961 in several fields like transport, communications and hospitality.