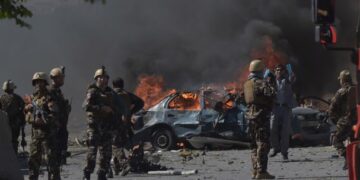 Colombo, August 27 (Counterpoint) : The ISIS-engineered blasts near the Kabul airport on Thursday, in which 13 US soldiers were killed along with dozens of Afghan civilians, have put the US at the crossroads. The blasts have put a question mark on US military withdrawal by August 31. They could also re-open the military option if the Taliban is unable or unwilling to crackdown on the ISIS as a priority. At any rate, peace in not in the offing in Afghanistan.

US President Joe Biden is undecided on what to do. On the one hand, he says he will stick to the withdrawal plan, and on the other, he vows to teach the ISIS-KP a lesson, which can be done only by waging war against it in Afghanistan, primarily.

“To those who carried out this attack, as well as anyone who wishes America harm, know this: We will not forgive; we will not forget,” Biden said in Washington. “We will hunt you down and make you pay. I will defend our interests in our people with every measure at my command,” he vowed even as he stated that the US will continue the evacuations of American citizens and US allies despite the attack. “We will not be deterred by terrorists; we will not let them stop our mission. We will continue the evacuations,” he said.

Biden is coming under increasing pressure at home to account for the loss of American lives and take punitive action. There are calls from some Republicans for his resignation. His faith in the Taliban’s commitment to neutralize its sworn enemy, the ISIS-Khurasan Province (ISIS-KP), is being seriously questioned.

Republican Senator Josh Hawley called for Biden’s resignation. “To say that today’s loss of American lives in Kabul is sickening does not begin to do justice to what has happened,” Hawley wrote on Twitter on the day of the blasts. “It is enraging. And Joe Biden is responsible. It is now clear beyond all doubt that he has neither the capacity nor the will to lead.”

Kevin McCarthy, the Republican leader in the House of Representatives, said enemies of the US were taking advantage of the “chaotic nature of Biden’s withdrawal”. He called on House Speaker Nancy Pelosi to convene Congress to “prohibit the withdrawal of our troops until every American is safely out”.

Republican Rep. Adam Kinzinger told CNN that if Biden does not respond to the explosions, it can embolden terrorist groups. “The fact is there are people that no matter how much we want to go home, they want to kill us. We either fight them there or we’ll fight them here. If we leave now without following through on our mission and our commitment to Americans and our Afghan partners, that will actually do more damage than any suicide bomb did today,” he said.

Bob Menendez, the Democratic chair of the Senate Foreign Relations Committee, warned against trusting the Taliban to protect withdrawing US troops or to take on the ISIS-KP.

Biden, however, defended the policy of coordinating with the Taliban. On Thursday he said that the relationship with the group is one of convenience, not trust. According to a State Department Spokesman, at the meeting with G7 leaders this week, Biden had conveyed that withdrawal would depend on continued coordination with the Taliban, including continued access for evacuees to the airport. He had also asked the Pentagon and the State Department for contingency plans to adjust the timeline should that become necessary.

US officials told Reuters that the US had been telling the Taliban that the timeline is contingent on their cooperation. Biden sent CIA Director William Burns to meet Taliban leader Abdul Ghani Baradar in Kabul on Monday.

In the American mind, the killing of Americans in any country overseas is a cardinal and inexcusable sin which calls for sending the Marines in.  Therefore it would not be surprising if Biden sooner or later militarily avenges the Kabul killings. The only factor that will restrain him is the presence of 1500 Americans still stranded in Afghanistan.

Meanwhile, the Taliban have made it clear that they do not want any foreign forces, including forces from friendly Islamic countries on the  soil of Afghanistan. Turkey, a friendly Islamic country, had offered to militarily protect and run the Kabul airport after America withdraws on August 31. In fact, Turkish troops were already there at the airport. But the Taliban told Turkey that it would require civilian expertise to run the airport, not troops. As a consequence, Turkish troops, which were stationed in the airport, began withdrawing. Apparently, Turkey had no objection to the Taliban’s stand.

The Taliban’s understanding with Turkey is a clear signal that the militants will not tolerate the continued presence or a fresh induction of US troops in Afghanistan after the August 31 deadline. The Taliban have already made it clear to the US that the deadline is sacrosanct.

Therefore, any US bid to extend the deadline without the express consent of the Taliban is bound to trigger hostilities. Indeed, Afghanistan, the Taliban and the US are all at a crossroads.