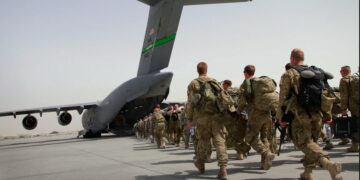 Taliban plead for recognition as the unforgiving US tightens the screw

Taliban plead for recognition as the unforgiving US tightens the screw Colombo, September 1 (Counterpoint): With the last of American troops leaving Afghanistan by the August 31 deadline, the Taliban have achieved a key objective – ending the military occupation of the country by the world’s sole super power.  But the Taliban have not been able to exult over this monumental achievement, given the grim reality of the continued challenge to their regime from the US and the international community and the caution shown by potential friends (China and Russia) and even the existing friend (Pakistan).

On Tuesday, the Taliban called on nations, especially the United States, to resume diplomatic relations with Afghanistan. Taliban spokesman Zabihullah Mujahid said that he expects the US to reopen its embassy in Kabul. “We also want to have trade relations with the US,” he added. Ahmadullah Wasiq, a member of the Taliban’s cultural commission said: “We promise to the world, regional countries and neighboring countries that Afghanistan’s soil will not be used against them. The world should recognize the Afghan government and cooperate with us on reconstruction and with investments.” The Kabul-based  Tolo News quoted Noor Agha, a common man, as saying: “Today Afghanistan needs the world’s cooperation more than ever.”

However, the international community and the United Nations, have made diplomatic relations with the Taliban regime conditional on the latter’s actions and implementation of promises. But fulfilling these expectations are easier said than done. Afghanistan is still a disunited country. Its coffers are empty. Its people are poor and its government had been heavily dependent on external grants in the last two decades. The country is already under harsh financial sanctions from the US, its allies and the international financial and development institutions.

There is also a thinly veiled threat of military interventions by the US without putting troops on Afghan soil. The US has also stated that it will not revive its embassy in Kabul but will conduct its operations from the safety of Qatar, indicating a yawning trust deficit. The Taliban have got rid of US troops, but not the US yoke.

Stating America’s stand on the Taliban in the post-withdrawal era, Secretary of State Antony Blinken said: “Any engagement with a Taliban-led government in Kabul will be driven by one thing only: our vital national interests. If we can work with the new Afghan government in a way that helps secure those interests, including the safe return of Mark Frerichs, a US citizen who has been held hostage in the region since early last year, and in a way that brings greater stability to the country and region and protects the gains of the past two decades, we will do it. But we will not do it on the basis of trust or faith. Every step we take will be based not on what the Taliban-led government says but what it does to live up to its commitments.”

“The Taliban seeks international legitimacy and support. Our message is that any legitimacy and any support will have to be earned. The Taliban can do that by meeting commitments and obligations on freedom of travel, respecting the basic rights of the Afghan people, including women and minorities, upholding its commitments on counterterrorism, not carrying out reprisal violence against those who choose to stay in Afghanistan, and forming an inclusive government that can meet the needs and reflect the aspirations of the Afghan people.”

Humanitarian aid would be given to Afghanistan, Binken said, but warned that “the aid will not flow through the government (of Afghanistan) but rather through independent organizations such as UN agencies and NGOs. And we expect that those efforts will not be impeded by the Taliban or anyone else.”

Making it clear that America has not disengaged from Afghanistan, and that the US would be a critical factor in Afghan affairs, Blinken said: “We have a plan for what’s next. We’re putting it into action.”

The American demands are indeed a tall order for the Taliban, given their deep-set political and ideological predilections, and the current domestic challenges from  the ISIS-KP (aka Daesh) and the Al Qaeda. Militants are intrinsically too proud to yield to pressure and are impelled to fight back rather than compromise.

Vis-a-vis the rival Islamic radicals, the Taliban have their turf to defend. In that context, yielding to US threats would be counterproductive.  The Taliban are yet to consolidate their hold on Afghanistan. The Daesh showed its power by staging suicide attacks on the Kabul airport. The Ahmad Massoud group is resisting in Panjshir province.

To the disappointment of friends China and Pakistan, a top Taliban leader has advised them to tackle their Islamic rebels through dialogue and that there is little the Taliban can do. This will not pass muster in Moscow and Beijing. Besides, every country has demanded that the Taliban form an inclusive government and guarantee women’s and minorities’ rights. But the Taliban are political monopolists and ideologically rigid.

However, the most pressing challenge is the revival of an economy which has been in a shambles due to the prolonged war. The world is not ready to rescue it and has in fact put sanctions, albeit informally. The US has already frozen US$ 9.5 billion of Afghanistan’s funds in its banking system. The IMF has withheld SDR equivalent to US$ 500 million.  But Afghanistan is in great need of money as 47% of its population is living below the poverty line. 34.3% live on a daily wage of less than US$1.9. According to the World Bank, 75% of Afghanistan’s public funding comes from foreign grants indicating its abject dependence on international (Western) donors.

However, the Taliban itself may have money illegally made by drug trafficking, opium poppy production, extortion, kidnapping for ransom, mineral exploitation, revenues from tax collection in areas under its control or influence and donations from friendly quarters. The UN has reported that profits from the mining sector earned the Taliban approximately US$ 464 million in 2020.

Be that as it may, Hans-Jakob Schindler, a former German diplomat, told NBC that Afghanistan’ s economy might collapse in a “couple of months”. Banks are yet to open. Individuals and firms have little or money.  According to Wikileaks, the corrupt rich and foreign contractors, who were a dime a dozen during the war, had already fled with their money.

Most Afghan households rely on the low-productivity agriculture sector.  Security issues, corruption and political instability had together held back private-sector development. Afghanistan was ranked 173rd out of 190 countries in the World Bank’s 2020 Doing Business Survey.

Despite having one of the world’s lowest levels of external debt relative to GDP (around 8.6% of GDP according to the IMF), Afghanistan was deemed a high risk country even before the current turmoil. This was due to its high dependency on grants and concessional borrowing. Grants accounted for around a third of GDP.

However, if the Taliban behave as per the expectations of the international community, Afghanistan can exploit the country’s immense mineral wealth with international investments and becoming a rich country.

According to a 2010 Pentagon study, Afghanistan has US$ 1 trillion worth of mineral deposits such as iron, copper, gold and lithium, a rare earth metal essential for electric vehicle battery production. The nation has the potential to become the “Saudi Arabia of lithium,” the Pentagon memo said.