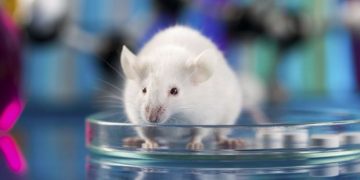 by Editor
in Around The World, Offbeat, Science
Reading Time: 2 mins read
4 0 Chicago, January 8 (Xinhua): Studying mice genetically modified to mimic the genetic disease neurofibromatosis type 1 (NF1) that is associated with sleep problems, researchers at Washington University School of Medicine in St. Louis found that the animals, like some people with NF1, slept in short and irregular spurts.

The study may help identify the molecular and cellular mechanisms that go awry and cause fragmented sleep patterns in people with and without the disease, the researchers noted.

The researchers bred mice with a mutation in their NF1 gene similar to what is seen in people with NF1. Then, they fitted onto the mice miniature versions of the caps people wear for sleep studies to measure brain waves and identify sleep patterns of the mice.

Mice normally sleep during the day. Like people, mice cycle several times from deep, dreamless sleep to REM sleep or dreaming and back again. However, mice with an NF1 mutation tended to wake up soon after they entered deep sleep, and the result was a fragmented, and probably not restful, day of sleep.

“Throughout the whole night and day, they fell asleep and woke up when they shouldn’t have,” said co-first author Corina Anastasaki, an instructor in neurology at the university. “They fell into deep sleep, but they didn’t stay there.”

Although the mice were engineered to mimic human NF1 disease, they could yield insights about the biological underpinnings of sleep in general, which could help people with sleep problems unrelated to NF1.

About a third of U.S. adults report some degree of insomnia, and 15 percent have chronic insomnia that lasts three months or more.

Statistics show that as many as half of people with NF1, a condition that causes benign tumors in the brain and on nerves throughout the body, have difficulty falling or staying asleep.   The findings were published on Jan. 4 in the Journal of Sleep Research.