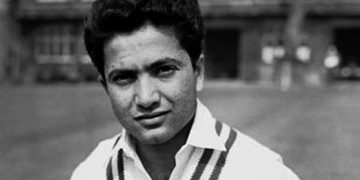 “A structure of bonding is born and nourished when Pakistan tours India,” said Pakistani cricketing legend the Late Hanif Mohammad

“A structure of bonding is born and nourished when Pakistan tours India,” said Pakistani cricketing legend the Late Hanif Mohammad My first recollection of an Indo-Pak tie dates back to Pakistan’s maiden Test series in 1952-53 in India. Since then, cricket has indeed changed a lot. The first Test in 1952 was at the Ferozeshah Kotla and we lost by an innings and 70-odd runs. It wasn’t a very memorable game for us, but one must admit that ours was a rather inexperienced side.

Nine of us, including me, were making our Test debut. Only my captain Abdul Hafeez Kardar and the great spinner Ameer Elahi had played Tests before, having turned out for undivided India. I was a 17-year-old then and not many remember that I had made my debut for Pakistan as a wicketkeeper. We were not aware of records at that time, but I am sure I must have been one of the youngest keepers in the history of the game. Pakistan had made 150-odd in their first innings in which I top-scored with 51. I therefore became the first Pakistani batsman to score a half-century in Tests. I remember opening the innings with the great Nazar Mohammed, who made 27. I also remember being dismissed by the great Vinoo Mankad, who had me caught by G.S. Ramchand. In fact, I still recollect most of the details from that match. Mankad, who scalped eight in the first innings, added five more to his haul in the second, and India won comfortably to go 1-0 up in the five-match series.

The second Test in Lucknow was most memorable for us simply because we humbled the mighty Indians by an innings and 43 runs to square the series. It was also Pakistan’s first ever Test victory and it had come in the very second match after we were given official recognition by the icc. Fazal Mahmood with 5 for 52 and 7 for 42 was the chief tormenter and with support from Nazar Mohammed, he decimated the Indian side. Nazar Mohammed earned the distinction of becoming the first Pakistani to score a hundred in a Test match and also the distinction of carrying his bat through, scoring 124 not out in 517 minutes. If the current team remembers that we had fought tooth and nail during our very first visit to India, it might serve as inspiration for them.

The third Test was in Bombay where we lost before drawing the last two. Though we lost the series 1-2, it showed that we could compete at the highest level on equal terms. The good thing about that series was that we played five matches. I am a great supporter of the five-match series. It gives the touring team a fair chance to come back into the series if they have fared poorly early on. But Test series are getting shorter and usually three Tests is the maximum the players get these days.

India and Pakistan are once again ready to face each other and such an occasion is always special. When the players from the two teams march out shoulder to shoulder, it’s great for Asian cricket. Cricket has changed a lot from the time I played the game, but we too had our share of stars like Vinoo Mankad, Vijay Hazare and Nazar Mohammed.

The Pakistan team has had a rather dismal tour of Australia, but that doesn’t mean that they will struggle in India as well. In fact, I think our players will do well as the conditions in India are similar to the ones back home. Pakistan need at least two good pacers now that Shoaib Akhtar is not in the team and a couple of quality spinners as wickets in India are known to turn later in the match. It should be a hard-fought series between two very well-matched sides, each boasting a foreign coach. It was nice to come down to Calcutta during the bcci platinum jubilee match last year on an invitation from the Indian board. I would be delighted to make another trip to India during the series if an opportunity arises. In fact, I met Bob Woolmer for the first time in Calcutta. It is always nice to meet old friends and acquaintances and talk about the game and its glorious uncertainties. Ek mahal banta hai aur dostana badhta hai Hindustan jaane se (A structure of bonding is born and nourished when Pakistan tours India).