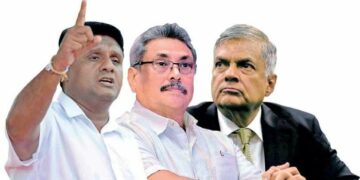 Colombo, April 21:   The opposition Samagi Jana Balawegaya (SJB) has said that the Gotabaya Rajapaksa government’s bid to nullify court rulings and to impose civil disabilities on key opposition leaders on the recommendations of a Special Presidential Commission on Political Victimization, is tantamount to over-riding the judiciary and therefore unconstitutional.

The Special Presidential Commission was empowered, among other things, to recommend the imposition of civic disability on persons found guilty of political victimization. The Commission had found that the establishment of the Commission to Investigate Allegations of Bribery or Corruption, Financial Crimes Investigations Division (FCID), and the Special Investigations Unit (SIU) of the Sri Lanka Police was against the provisions of the Code of Criminal Procedure.

The Order Book in parliament for April 21 had listed a motion on the Commission’s report, calling upon the House to resolve to implement the decisions and recommendations of the Commission.

In almost all the 61 listed cases, the Commission had recommended that cases filed against the complainants be withdrawn and action taken against the investigating officers and those who lodged complaints against these individuals. One of the punitive actions recommended was the imposition of civil liberties.

The opposition Samagi Jana Balawegaya (SJB) said in a note on Wednesday that the recommendations would have an “adverse and  damning” effect on the Rule of Law, democratic governance, the judiciary, and the process of criminal justice. The recommendations cast aspersions on the judiciary, the Office of the Attorney-General, law officers of the State and members of the unofficial Bar.

The Commission has ‘pronounced’ that persons who had been convicted by courts should not have been so convicted; that accused persons who are now being tried in courts are innocent and should be acquitted and discharged, and that further criminal proceedings should not be continued against persons awaiting trial before Trial at bar, the High Court or the Magistrates’ Court. The Commission had concluded that the judiciary of this country had indulged in a “witch-hunt”.

The SJB statement said: “Present and past Senior officials of the Attorney-General’s Department such as Additional Solicitor General Wasantha Navaratna Bandara PC and Solicitor General Dilrukshi Dias Wickremasinghe PC who were only performing their official functions have come under unfair criticism with vituperation in derogation of the professional and official duties of such officers, and therefore the Office of the Attorney-General, have been ridiculed attributing collateral reasons and political motivations in forwarding indictment and or recommending charges.”

“Members of the unofficial Bar who had only done their duty by their clients and or taking up matters in Public Interest as per the objectives of the Bar Association of Sri Lanka have been vilified and portrayed as been involved in political victimization and/or fabrication of evidence and or indulged in corrupt practices. It recommended that action should be taken as provided under relevant laws,” the SJB pointed out.

In the quadruple murder case tried by a High Court at Bar (with the judgment affirmed by a full bench of the Supreme Court) in which Duminda Silva, a politician/ former Member of Parliament was sentenced to death, the commission recommended that the Attorney General should reopen the case and move to discharge the accused.

The SJB charged that the procedure adopted by the Commission in its proceedings was not provided for in the Code of Criminal Procedure and was therefore arbitrary, capricious and impinged on the powers and the authority of the Attorney General who is also the Principle Law officer of the State.

The SJB pointed out that a Presidential Commission of Inquiry is not a court of law to recommend sentences. The submissions made before it are not public. There is no requirement to adhere to procedural safeguards that are a necessary part of civil or criminal legal proceedings. The findings of the Commission mostly rely on hearsay and statements by the complainants themselves or witnesses on their behalf.  It was reported that the accused law enforcement officers were not given the opportunity to present their own evidence or cross-examine witnesses.

The SJB further said that the Commission’s report had only made a series of political comments without any corroborating evidence. It’s call to halt ongoing trials and judicial proceedings before various courts, and to acquit those being currently tried for offences before the courts, amounts to interfering in independent judicial proceedings, and is tantamount to contempt.

“The findings and recommendations of the PCoI have a chilling effect on law enforcement and legal officials such as officers of the Attorney General’s Department. They discourage such officials from acting impartially and independently in bringing perpetrators to justice,” the SJB said.

It further pointed out that some persons who ought to have been mentioned in the report, had been left out, such as former President Maithripala Sirisena who presided over the meeting of the ACC on 5th February 2015 , and former Inspector General of Police Illangakoon who set up the Financial Crimes Investigation Department (FCID).

Some of the suspects and accused whose ‘acquittal and discharge’ have been recommended are private individuals who did not come within the purview of the Commission.

Stirring up the hornets’ nest

Reports say that although the ruling Sri Lanka Podujana Peramuna (SLPP) has two thirds majority in parliament, it may not be able to get enough support for the implementation of the Commission’s  recommendations. If these were taken seriously, the entire opposition will be deprived of civic rights!

That will not only become the cause for national and international ridicule and condemnation but will make leaders who are presently weak, popular. After President J.R.Jayewardene deprived former Prime Minister Sirmavo Bandaranaike of her civic rights in 1980, she became more popular and went to become Prime Minister again. The then government Minister Gamini Dissanayake admitted that Jayewardene’s action had given Sirimavo and her Sri Lanka Freedom Party (SLFP) a further lease of political life after the 1977 debacle.

In parliament a ruling party member advised against imposing civil disabilities and Justice Minister Ali Sabry appeared to support him. It is also not clear if the implementation of the Commission’s recommendations has the support of the politically aware and savvy Prime Minister Mahinda Rajapasa and the SLPP organizer Basil Rajapaksa.