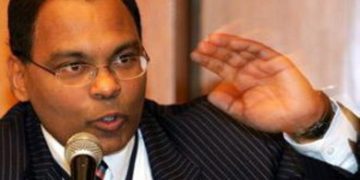 Dr.Gunaratna, who is an Honorary Professor at the Sir John Kotelawala Defense Academy, cites the recent tightening of anti-terror laws in the UK as an example for Sri Lanka to follow Colombo, September 25: Former Member of Parliament M.K.Sivajilingam was arrested in Kopay (Jaffna) for organizing an illegal celebration in memory of the late Tiger terrorist, Rasaiah Pradeepan alias Thileepan, who died while on a fast in 1987.

This is not the first time, the maverick politician was behind bars. Shivajilingam was detained almost every year for organizing the so-called ‘Mahaviru Day’ to glorify Tiger Supremo, Velupillai Prabhakaran. He was arrested by Velvettiturai police when the Jaffna Magistrate issued an arrest warrant over a case where he had evaded court proceedings in 2018. He was apprehended at his residence in Amman Koviladi and was produced before the Point Pedro Magistrate’s Court after recording a statement from him. The Tamil Eelam Liberation Organization (TELO) Chairman was arrested by the Valvettithurai police for celebrating the birthday of Prabhakaran. Although he celebrated Liberation Tigers of Tamil Eelam (LTTE) leader’s events, he was the leader of a rival organization, TELO.

Terrorism expert Dr. Rohan Gunaratna, commenting on Shivajilingam’s commemorating Thileepan on his 33rd fast-unto-death anniversary, said that those who commemorate terrorists should be given maximum punishment. He has called for the arrest and trial of Shivajilingam and others who glorify terrorists.

“They should be given the maximum punishment to deter others from following their destructive path,” said internationally renowned terrorism expert Dr Gunaratna, who is now Honorary Professor at the Sir John Kotelawala Defence University. “Maximum punishment should be given as there is a public interest in this case. It will deter others funded by LTTE front organisations in the Tamil Diaspora from reviving the separatist agenda of the LTTE. Collective and decisive leadership is vital to restore stability and security, the foundation of ethnic and religious harmony in Sri Lanka,” he argued.

The LTTE’s propaganda and paraphernalia should remain banned forever just as Germany banned Nazi symbols and activities after World War II, he suggested, pointing out that it is LTTE propaganda that fosters an environment for LTTE plots, plans and preparations aimed at its revival.

Thileepan had sat on a fast-unto-death on 11 September, 1987, to secure a five-point charter of demands including the setting up of an LTTE-dominated Interim Administrative Council for the Tamil dominated Northern-Eastern province as part of the India-Sri Lanka Accord to resolve the ethnic issue. With both Colombo and New Delhi going by the letter of the agreements already entered into, and refusing to accept the LTTE’s fresh demands, Thileepan refused to give up his fast and died after 11 days on 26 September, 1987. He was a cancer patient and was not in a condition to undertake a fast. His death was the first major incident that soured relations between the Indian Peace Keeping Force (IPKF) and the LTTE, that finally led to a long-drawn battle between the two from October 1987 to March 1990, the month in which the IPKF departed after President Ranasinghe Premadasa gave them the marching orders.

Shivajilingam, who is related to Prabhakaran, had sought permission to hold the commemoration ceremony of the fast-unto-death at the Thileepan memorial in Nallur, but the Jaffna police got a court order banning it on the grounds that a leader of a banned organisation like the LTTE could not be commemorated and glorified.

The argument that the previous United National Party (UNP)-led government had allowed the commemoration, did not cut ice with the Jaffna magistrate, who acceded to the police request to ban it.

However, Shivajilingam secretly changed the venue of the commemoration to Kondavil and performed a ceremony there. He was arrested and was subsequently released by a court on bail.

Speaking to News-In-Asia, Dr. Gunaratna said: “After the US declared victory in Afghanistan and Iraq, terrorism re-emerged because the terrorists’ support infrastructure remained intact. The tolerance of democracies revived violence.” Therefore he recommended that the security and intelligence platform in Sri Lanka’s north and east should continue for one generation until the separatist ideology disappears.

Most European countries introduced harsh laws against terrorism after they experienced brutal terrorist attacks in recent years. The British drafted new laws to eliminate terrorism. Justice Secretary & Lord Chancellor, Rt Hon Robert Buckland QC MP, said, that terrorists and their hateful ideologies should not have any place on British streets.

“They can now expect to go to prison for longer and face tougher controls on release. From introducing a 14-year minimum for the most dangerous offenders to putting in place stricter monitoring measures, the British government is pursuing every option available to tackle the threat of terrorism and keep communities safe,” he said.

The new Bill in UK also allows the courts to consider if any serious offence is terror-related, for example an offence involving firearms where there is a proven terrorist connection, and allow tougher sentences to be imposed. This would rule out any possibility of a serious terror offender being released automatically before the end of their sentence.

Dr. Gunaratna said that research demonstrates that if there is looseness (Government neglect) as opposed to tightness (Government vigilance), terrorist groups exploit the gaps and loopholes and come back. The groups and personalities that glorify terrorism should be identified and punished to deter future violence. Most terrorist groups abuse the freedom of expression to promote their vicious ideology to radicalize the youth into a culture of hate and violence, he added.

“If a democracy permits display of terrorist paraphernalia and allows the dissemination of propaganda, the next step will be protests and demonstrations breaking out into violence. Like the Islamic State and al Qaeda, LTTE glorified death. If commemoration and celebration of death is permitted, it will lead to a culture of destruction,” he said.

According to Dr. Gunaratna, there have been a dozen plots by the LTTE to revive since the end of Eelam War IV in May 2009. Most of the LTTE plots were supported by LTTE fronts overseas. The number of plots increased due to the delisting of LTTE fronts overseas in the last few years, he pointed out.

The new Bill on terrorism in UK includes, a new ‘Serious Terrorism Sentence’ for dangerous offenders with a 14-year minimum jail term and up to 25 years spent on license, ending early release for the most serious offenders who receive Extended Determinate Sentences – instead the whole time will be served in custody, increasing the maximum penalty from 10 to 14 years for a number of terror offences, including membership of a proscribed organization, ensuring a minimum period of 12 months on license for all terror offenders as well as requiring adult offenders to take polygraph tests, widening the list of offences that can be classed as terror-related to ensure they carry tougher sentences and boosting the monitoring and disruption tools available to the security services and counter-terrorism police, by strengthening Terrorism Prevention and Investigation Measures and supporting the use of Serious Crime Prevention Orders in terrorism cases.

Dr. Gunaratna noted that the ideology of separatism is fading but there are a few trying to revive it. “Most Tamils both in Sri Lanka and overseas have left the LTTE and its erstwhile proxy the Tamil National Alliance (TNA). However, a few racist politicians continue to promote the separatist agenda,” he said.

It is essential for the Government to relist the delisted LTTE fronts overseas as some of them are operating in Sri Lanka, the expert stressed. Dr. Gunaratna recommended that the Northern and Eastern provinces be economically developed and the Sri Lankan identity be promoted.

“The best strategy to counter racism is for Sri Lanka to develop a proper national education policy where Sinhalese, Tamils, and Muslims study together,” he said.

He warned that without regulating the ethnic and religious space, Sri Lanka can never have social harmony, political stability and economic prosperity.

British Home Secretary Priti Patel has said that the shocking attacks at Fishmongers’ Hall and Streatham revealed serious flaws in the way terrorist offenders are dealt with. “We promised to act and today we are delivering on that promise. Those who senselessly seek to damage and destroy lives need to know we will do whatever it takes to stop them,” she said.

The Bill follows emergency legislation passed earlier which retrospectively ended automatic early release of terrorist offenders serving standard determinate sentences. This forced them to spend a minimum two-thirds of their term behind bars before being considered for release by the Parole Board. In addition, a nationwide network of counter-terrorism specialists is now embedded throughout the prison and probation service and supported by 29,000 staff who are trained to spot signs of extremism.

When the Sri Lankan government implements the policy of ‘one country, one law’, it will be necessary to include harsh punishments for glorification, aiding and abetting terrorism.