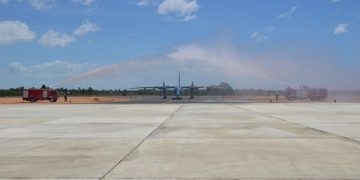 Colombo, March 26 (newsin.asia) – Sri Lanka’s Transport Ministry, on Monday said a newly re-developed airport in Batticaloa, in eastern Sri Lanka, will boost tourism into the region and pave way for more flights to land there.

The government information department said the Batticaloa Airport which was re-developed as a domestic airport was opened by Transport Minister Nimal Siripala De Silva on Sunday to help promote the influx of tourists into the East by providing safer and expeditious travel instead of long hours on the road.

The Ministry further said that as the government has understood the need of having scheduled air services between domestic airports for sustained promotion of internal air transport, any airline which commences scheduled flights to Batticaloa airport would be given free landing and parking for a period of three months from its date of opening.

Air Traffic Control at the Batticaloaairport would be provided by trained and licensed personnel in accordance with international standards.

Minister De Silva said the government will also start building an aviation school in Batticaloa before the year end and encourages establishment of flying schools and related industries centering the airport in order to uplift the living and social conditions of the area.

Batticaloa Airport was first opened 60 years ago in November 1958.