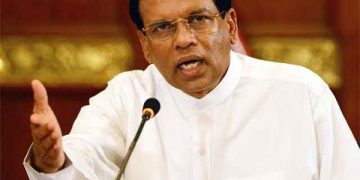 Aug 11 (NIA) – Sri Lankan President Maithripala Sirisena has said his government will not be imprudent and unpatriotic by giving its nod to construct a bridge, linking India and Sri Lanka.

Speaking at a a religious ceremony held at the Ganelanda temple in Thalawathugoda, in the outskirts of the capital, President Sirisena said that neither his government nor the Indian government had held any discussions with regard to constructing the bridge.

He also vehemently denied such allegations spread with the intention of making his government unpopular.

“When I met ADB officials (in June), they told me to look at a connectivity project between the Indian mainland and Sri Lanka as well. They said that they would finance it. They proposed a bridge between Rameswaram and Sri Lanka,” Gadkari, speaking at a platform where special invitees interacted with Mint staff.

Currently, India is connected to Sri Lanka by at least 100 flights a week.

The proposed bridge, if ever constructed is expected to be around Indian Rs 240,000 million.

A Joint Opposition parliamentarian in Sri Lanka, Udaya Gammanpila recently told journalists in Colombo that he will ‘blow up’ the bridge if it is ever constructed.

“The number of unemployed persons in India is over 50 million. There is no way we would be able to stop them from coming here looking for jobs,” he said.