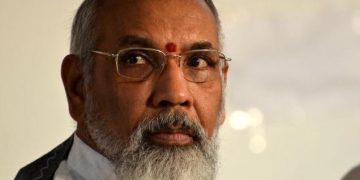 Jaffna, October 5 (NIA): The Northern Provincial Council (NPC) is likely to pass a resolution on Thursday seeking enhanced police protection for Chief Minister C.V.Wigneswaran and other members of the council and an investigation into Wigneswaran’s contention that he has been continually receiving information about a plot to assassinate him and blame it on the Liberation Tigers of Tamil Eelam (LTTE).

The resolution is expected to be rushed through because the council cannot postpone it given the importance of the charge, sources said.

Since the Chief Minister had mentioned the threat in writing and had it read out in a public forum ,the matter cannot be taken lightly. Whether the Tamil National Alliance (TNA), the party to which Wigneswaran belongs, takes it up or not, the NPC is duty bound to take it up, the sources said.

On Wednesday, TNA’s General Secretary Mavai Senathirajah had said that he had asked TNA chief, R.Sampanthan, to discuss the matter with Sri Lankan President Maithripala Sirisena,  and seek enhanced police protection for Wigneswaran.

Senathirajah told the media that Wigneswaran, having been a Supreme Court judge before entering politics in 2013, would not have made a charge of such seriousness in writing, without grounds. Party leader Sampanthan told DailyFT that taking the matter up with the President is under consideration.

Wigneswaran had made the charge in a written speech which was read out at the release of a book written by Prof.Thirunavukkarasu on Sri Lankan constitutional history from the Donoughmore constitution in the 1930s to the one being drafted by incumbent President Sirisena.

Professor Thirunavukkarasu, formerly of Jaffna University, is now living in exile in Tamil Nadu. His book reportedly describes how the Tamils have always been played out and will be played out by Sinhalese majoritarianism and its international supporters.

Chief Minister Wigneswaran, who did not attend the function, nevertheless sent a speech which was read out. In that he reiterated his claim that the Tamils are being cheated again in ever so many ways and how, if he delineates the grievances, he is misinterpreted and accused of being a communalist and extremist. He then went on to mention a threat to his life from Sinhalese-majority South Sri Lanka.

Dinesh Gunawardene, JO leader, said that by demanding the stoppage of construction of Buddhist  temples and settlement of Sinhalese in the Tamil-majority North, Wigneswaran is violating rights enshrined in the Sri Lankan constitution. Wimal Weerawansa, another JP MP, said that the TNA is responsible for Wigneswaran’s statement as he was elected as a TNA candidate to the NPC.

However, the Leader of the House and cabinet minister, Lakshman Kiriella, said that the matter should not be raised in the House because Wigneswaran had said that he had been misinterpreted and had clarified his position in writing.

TNA Chief and Leader of the official Opposition R.Sampanthan said that a careful reading of Wigneswaran’s speech at the “Ezhuga Thamizh”(Tamils Arise) rally showed that he had not said anything that the TNA has not been saying. In fact the TNA has been urging the powers-that-be in Colombo to attend to these issues expeditiously, Sampanthan pointed out.

Moreover, Wigneswaran had clarified his stand, correcting the misrepresentations in the South, Sampanthan pointed out.

His defense of Wigneswaran’s speech notwithstanding , Sampanthan said that the TNA had good reasons for not attending the “Ezhuga Tamizh” rally. The TNA said that the rally was “inopportune”.