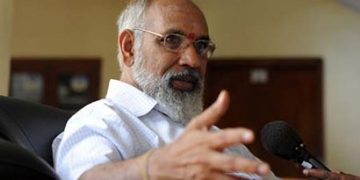 Colombo, September 1 (NIA): The Chief Minister of Sri Lanka’s Tamil majority Northern Province, C.V.Wigneswaran, has managed to get a separate meeting with the visiting UN Secretary General, Ban Ki-moon, after being clubbed together with other leaders of the Tamil National Alliance (TNA) for a full-scale official session with the UN chief when he comes to Jaffna on September 2.

Sources in the TNA said that on his way out after a full-scale meeting with the TNA leaders led by party chief R.Sampanthan, Ban will have a brief tete-a-tete with Wigneswaran.

Complaining about this publicly on Sunday, Wigneswaran said that the invitation to join the TNA  delegation to meet the UN Secretary General was given half heartedly by the TNA chief  Sampanthan. Sampanthan had telephoned him to say that he could join the TNA delegation if he wished to. Wigneswaran told the media that given that kind of invitation, he was not sure if he would go for the meeting.

The UN, the Sri Lankan government ,US, EU, UK and India all want economic development to take place even as efforts are made to address issues of war time accountability and ethnic reconciliation through concrete measures spelt out in the UN Human Rights Council resolution of October 1, 2015