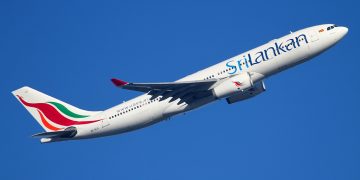 All passengers with a travel history to India within the last 14 days will not be allowed to disembark in Sri Lanka.

The service will be twice weekly for the first month of operation with flights on Tuesdays and Thursdays.

Flights will be increased to three times a week starting from Oct 30, with a change to flights on Wednesdays, Fridays and Sundays.

“This is an important step in our strategy of increasing our focus on Asia, from the Middle East in the west to China and Japan in the east,” Ajith Dias, Chairman of SriLankan Airlines, said.

“In addition, as we announced previously, we are taking over operations of Mihin Lanka, in accordance with our government’s policy.”

The route will be served by SriLankan’s medium haul fleet of Airbus A320 and A321 aircraft. SriLankan already has a daily service to Karachi, Pakistan’s largest city and commercial center.

“We will be closely evaluating market opportunities in Lahore and other South Asian cities, and adding more destinations and frequencies,” Suren Ratwatte, chief executive of SriLankan Airlines said.

“This further cements our burgeoning partnership with Pakistan International Airlines with whom we expect further cooperation.”

Sri Lanka’s flagship carrier is currently facing a staggering debt of nearly 4 billion U.S. dollars with the government terming it as a “landmine” for the country’s economy.

Prime Minister Ranil Wickremesinghe said in April that the government would seek for an international partner to invest and manage the airline and the state would bear up part of its debts.

Wickremesinghe, soon after being sworn to power last year in a parliamentary election, ordered a criminal investigation into alleged corruption at the national airline during the previous regime.