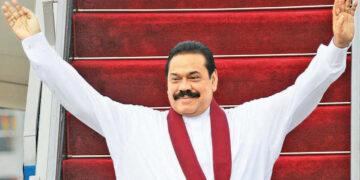 In his 76 years of life, Sri Lankan Prime Minister Mahinda Rajapaksa has established himself as a national leader and an international statesman of considerable stature. Colombo, November 18: Being a good leader and maintaining that high quality for half a century is no mean achievement. One must possess effective leadership qualities that helps one achieve higher goals and objectives. This is true of the nonviolent resistance and persistence of Mahatma Gandhi and the magnanimous vision of Nelson Mandela. Our leaders, their policies and their acts are creating history for generations to come.

In his 76 years of life, Sri Lankan Prime Minister Mahinda Rajapaksa has established himself as a national leader and an international statesman of considerable stature. During his 51 year-long political career, he has represented the spirit of an era, the pulse of the nation and the warp and woof of the social, cultural and political fabric of Sri Lanka.

He is known as the ultimate survivor, a political enigma, an ardent nationalist, a champion of the people, protector of the nation, trusted custodian of Buddhism and the guardian of religious freedom of all communities, a human rights activist, and last but not the least, an untiring street-fighter. These are few sobriquets of Mahinda Rajapaksa, who celebrates his 76th birthday on Thursday.

Mahinda Rajapaksa began his checkered political career on May 27, 1970 as the youngest Parliamentarian. He reached his zenith when he guided the Lankan Armed Forces to end the 30-year-long fight against the brutal terrorist organization, the Liberation Tigers of Tamil Eelam (LTTE) in 2009 as the President and Supreme Commander of Armed Forces of Sri Lanka.

He entered Parliament at the young age of 24 and served in many capacities over many years. He held several ministries ranging from Labour to Fisheries becoming Prime Minister in 2004. He was elected The fifth Executive President of Sri Lanka in the following year.

Although Rajapaksa was born into a land-holding elite family, he was always very close to the common people irrespective of their creed, caste, religion or social status. His uncle, D. M. Rajapaksa, known as the ‘Lion of Ruhuna’ was a popular political leader of the area. After his demise, Mahinda’s father, D. A. Rajapaksa, served as a member of the Sri Lankan Parliament, holding the Beliatta seat from 1947 to 1965. In 1970, Mahinda became Sri Lanka’s youngest-ever Member of Parliament when he was elected to the seat that his father had vacated just five years earlier. Young parliamentarian Mahinda studied law after completion of school studies and received a law degree from Colombo Law College in 1974.

Mahinda’s exceptional characteristic has been the ability to face defeats. After losing his seat in parliament in 1977, he focused on his law career until reentering Parliament in 1989, this time representing the Hambantota district. He was reelected and continued as a Parliamentarian until 2005.

A popular center-left politician, Mahinda was at the forefront as a defender of human rights during the state suppression of a youth rebellion in 1987-90, when Sri Lanka was recognized as one of the world’s most dangerous countries for the supporters of youth rebellions. His fight for the rights of the suppressed people stood him in good stead in his political journey throughout.

In the January 2010 presidential election, he got reelected easily, winning 58 percent of the vote. Rajapaksa’s second term saw sustained economic growth. He continued to enjoy the strong support of the large Sinhalese majority in the country. However, his relations with Western countries were strained over Sri Lanka’s refusal to bow down to their call for international investigations of the military’s treatment of Tamils in the last phase of the conflict.

Addressing the United Nations General assembly he said, “Sri Lanka’s Government, at all times responsive to the priorities reflected in domestic public opinion, is engaged in all measures required for meaningful progress in these fields. A significant event in this regard is the opportunity which the people of the Northern Province enjoyed at the elections, to elect their representatives in the Provincial Council. It is a matter of legitimate satisfaction to me that this was made possible after the lapse of almost a quarter of a century. There can be no doubt regarding the crucial importance of this measure in the context of political empowerment and reconciliation. It is clearly the responsibility of the international community to assist with these efforts and to ensure their success for the benefit of all the people of Sri Lanka.”

Without mincing his words, President Mahinda Rajapaksa pointed out that in spite of the visible progress made, and consistent engagement with UN mechanisms, many countries are surprised at the disproportionate emphasis on Sri Lanka, and the unequal treatment through the multilateral framework. The basis for this relentless pursuit was questioned.

“It is my conviction that the UN system should be astute to ensure the consistency of standards applied so that there is no room for suspicion of manipulation of the UN System by interested parties to fulfill their agendas,” he said.

READ: Steps underway to avert rise in COVID cases due to protest in Colombo: Health Ministry

The emphasis put by Mahinda Rajapaksa as the President of the country in 2012 is equally relevant today. The UN has consistently ensured cooperation between States, and provided a universal platform for discussions on a range of issues, contentious or otherwise. “It is imperative that we jealously protect and abide by the principle of equal treatment of countries, which has been the very basis of this global organization. Be it economic or political issues, equality must form the bedrock of all international interactions,” he said.

The crusade commenced by Mahinda Rajapaksa and the policies outlined by him will continue to guide the nation for years to come. The people’s mandate given at the Presidential Election in November 2019 to his brother Gotabaya Rajapaksa, was another fitting tribute to Mahinda, a leader who has carved a niche for himself in the history of our nation.

Today, as Prime Minister in the government of President Gotabaya Rajapaksa, Mahinda will no doubt carry forward his mission of ensuring equality and prosperity for all the peoples of Sri Lanka.

Emphasizing this, Mahinda Rajapaksa, in a recent speech, stressed his commitment to work with determination and patience to ‘safeguard the Motherland we have built, and take it further to the heights of world-winning achievements’.

“Our future responsibility is to safeguard all those achievements and proceed with the tasks of nation building,” said Mahinda Rajapaksa, the charismatic leader with an ever-growing political appeal.