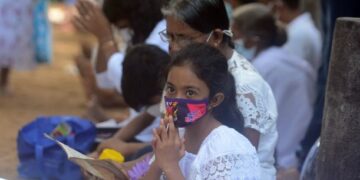 Colombo, July 23: The Esala Poya or Full Moon Day on July 23, was observed with devotion by Sri Lankan Buddhists. Devotees thronged at the famous Kelaniya temple near Colombo as well as other temples across the island nation to offer lotus flowers to the Buddha.

The Esala Poya Day represents many significant events in the Buddha’s life.

* The conception of Prince Siddhartha in Queen Mahamaya’s womb occurred on this day.

* On the same day, Prince Siddhartha gave up his lay life, donned the robes of an ascetic and went in search of Enlightenment or Buddhahood as he became disillusioned with lay life after encountering an old man, a sick man and a corpse.

He realized everyone including himself, a Prince, must go through old age, sickness and death. His final encounter was with a sage. Then, he thought of becoming an ascetic or a sage and finding the truth was the way out of Samsara (life).

Prince Siddhartha’s giving up of lay life is known as the Great Renunciation. In preparation to leave the palace, he quietly went and looked at his son Prince Rahula, who was born on that day and Princess Yasodhara, his wife, both of whom were fast asleep. Then he mounted his horse Kantaka and with his trusted Minister Channa, left the Palace and his life as a Prince forever.

When they came to the bank of the river Neranjana, Prince Siddhartha dismounted. He cut off his hair with his sword, took off his royal garments and donned the yellow robes of an ascetic. He gave his clothes to weeping Channa and bade him to go back to the Palace and break the news of his Renunciation. The horse Kantaka watched his beloved master walk away and died of a broken heart.