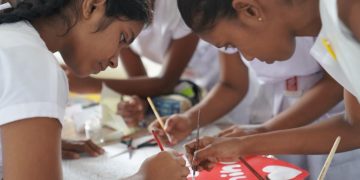 COLOMBO, March 9 (Xinhua) — “My drawing is to show that at this time of need, Sri Lankans are with their Chinese friends to support them,” said Shalani Upekshani, a girl whose painting depicts doctors in China helping a patient infected with COVID-19 on one side, while on the other side a Sri Lankan holds hands with the patient.

The 16-year-old is among 43 representatives from about 2,000 students in Devi Balika Vidyalaya, a girls’ school in the capital city of Colombo, who jointly wrote to Peng Liyuan, wife of Chinese President Xi Jinping, and attached their art works to show support for China’s battle against COVID-19.

“Mindful of the severe nature of the infection and its impact on people’s lives and the country’s economy, we want to express our good wishes and that we are with you and your fellow citizens,” the students wrote in the letter.

“Our students send their love to the students in China through art, as the Chinese students have supported us in the Manjari exhibition,” said Indika Samarajeewa, an art teacher at the public school.

The school received a lot of paintings from students in China to hold an international art exhibition every two years, said Samarajeewa, adding that it has received several paintings from the Chinese city of Wuhan, where the disease first broke out, for this year’s exhibition named “Manjari,” or “Collection,” which will be held in May.

The decision to prepare the art works and the letter was entirely the idea of the Sri Lankan students, who learned about the virus through social media and news, and felt sad for their friends in China, the teacher said.

Lankan girls show a painting from Wuhan. Photo: Tang Lu/XinhuaA few days after the letter and the art works were handed to the Chinese Embassy in Colombo, the students received a reply letter from Peng, who expressed her appreciation for their support and encouraged them to help contribute to the China-Sri Lanka friendship.

Describing receiving Peng’s letter as a dream come true, Nethmini Divyanjalee, a student, said “we never expected that we would receive her response. I am very happy.”

The students said although they have never been to China, they would like to visit the country and meet their Chinese friends one day.

“It is an honor not only for the school, but also for the country. I express my heartful gratitude to Peng for her response,” said W. Samarasinghe Samarasinghe, the school principal.

The students said they will continue to create art and write cards to express their support for China in fighting the virus.

“I am sure China will defeat the virus soon,” said Subomi Rajapaksha, a 10-year-old girl whose painting depicts children from China and Sri Lanka playing happily in the near future when the epidemic is over.

“As you have always been there for us in difficulties, we are going to stand by your side in every step towards a better future,” 17-year-old student T.H Saubhagya Jayawardena wrote on her card. (Photos and Video: Tang Lu/Xinhua)