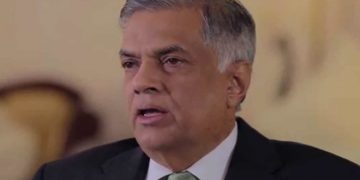 Aug 26 (NIA) – Sri Lankan Prime Minister Ranil Wickremesinghe on Friday called for a report on the radical ‘Sinhale Jathika Balamuluwa’ group which attacked a group of protesters who were opposing racism in the capital last week.

Wickremesinghe ordered Minister of Law and Order, Sagala Ratnayake, to submit a report on the action taken by the police regarding the clash between the two groups.

A peaceful protest, by the group ‘Ekamale’ (same blood) led by former Colombo Mayor Azath Sally was held at the Bauddhaloka Mawatha in Colombo last week when a group from the ‘Sinhale’ interrupted their proceedings causing a tense situation to erupt.

Protesters alleged that the police were ‘late’ to intervene into the situation and have called for a probe into the incident.