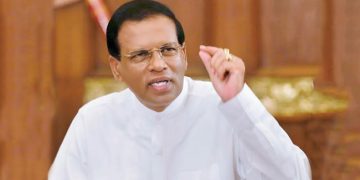 Colombo, Nov 3 (NIA) – Sri Lanka’s President, Maithripala Sirisena, on Thursday said that an independent probe must be held over a controversial bond scam at the Central Bank.

Speaking at a public rally, in the capital, Sirisena said that he will obtain legal advise on a report on the Central Bank bond controversy, released last week by a parliamentary group.

He further said that politicians should not interfere in the probe.

“I have never spoken on the bond scam before but now I am saying it must be investigated independently,” he said.

A Sri Lankan parliamentary committee, last week, recommended legal action to be taken against former Central Bank Governor Arjuna Mahendran and other officials for being involved in the controversial bond deals amounting to millions of dollars.

Sunil Handunetti, Chairman of the Committee on Public Enterprises (COPE), presenting the COPE report to Parliament said that evidence brought before the committee had raised reasonable doubt that Mahendran should be held directly responsible over the bond transaction amounting to millions of dollars and that legal action should be taken against him and responsible individuals.

He said Perpetual Treasuries, a firm connected to Mahendran’s son-in-law had made enormous profits from the deals.

The committee recommended that action should be taken to examine and recover any losses to the state and central bank.

The Central Bank should also conduct its own probe and come up with procedures to make auctions transparent, the Committee recommended.

Prime Minister Ranil Wickremesinghe said that the government will respect the report and proposed that it be sent to the Attorney General for further action.