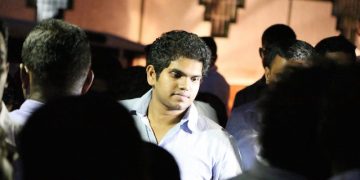 Colombo, Oct. 13 (NIA) – Sri Lankan President Maithripala Sirisena has ordered a full scale investigation into a recent attack on a nightclub in the capital in which his on, Daham Sirisena, is alleged to be involved in.

Acting government spokesperson, Karunarathna Paranavithana told reportes here on Wednesday that Sirisena had instructed the police to conduct a probe while the presidential investigations unit would also conduct a seperate investigation into the incident.

“We will see what the results of the investigations are,” Paranavithana said when inquired as to what action would be taken.

The brawl allegedly broke out on Saturday night at a popular nightclub in Colombo which left one guard injured.

Meanwhile, the Colombo Telepgraph, in a report quoting sources, said that special security provided for Daham Sirisena from the Presidential Security Division (PSD) has been removed with immediate effect following their involvement in nightclub brawl, on Saturday morning.

This step has been taken on the orders of President Maithripala Sirisena.

“President Sirisena does not even approve Daham going to a night club, let alone being involved in such a brawl,” a close source to Sirisena said.

The source added that removing Daham’s security was the first step taken to punish the President’s son, and more action will follow on the instructions of the President following the completion of the investigations.

The brawl allegedly broke out when Sirisena and his friends were denied entry to the night club around 2 am on Saturday.

They had then allegedly left and returned with poles and had initially hit one security guard on the head with a flower pot.

Thereafter the mob went berserk smashing the glass panes at the entrance to the building. Some of the other night club revelers waiting to enter the night club had also been assaulted by the group.