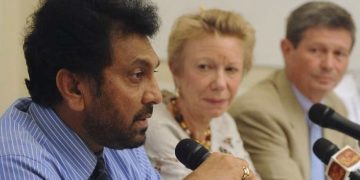 Colombo, February 24 (The Sunday Island): Former navy commander, Admiral Wasantha Karannagoda, has been accused of conspiracy and made a suspect in the internationally-condemned killing of 11 young men nearly a decade ago.

Colombo Fort Magistrate Ranga Dissanayake impounded Karannagoda’s passport on Friday after police named him the 14th suspect in the abductions and killings carried out between 2008 and 2009 as part of a lucrative extortion racket.

The police Criminal Investigation Department (CID) told the magistrate that Karannagoda, 66, had also aided and abetted the illegal confinement of the 11 young men by navy personnel directly under him. He was also accused of concealing information as well as trying to mislead investigators.

The magistrate was also told that the attorney general will indict Karannagoda and the 13 other co-accused in the high court.

CID detectives have uncovered chilling details of how naval personnel engaged in a “white van operation” abducting children of wealthy business families and killing them after extorting money from them. The victims were teenagers or in their early twenties.

One of the naval officers had used a car from a victim and given it as a birthday gift to his wife.

While investigating the abduction of the young men, the CID stumbled on another double murder of businessmen carried out by a naval unit which operated from the Welisara camp. A van stolen from those two victims had been cannibalised, but police were able to trace much of the parts.

Some sailors had also used mobile phones stolen from their victims. This linked them to the crimes they had committed, according to investigators.

There were reports of some navy personnel meeting with mothers of the victims and forcing them to part with their gold jewellery in exchange for the return of their children, a promise never kept.

Police alleged before the magistrate on Friday that Karannagoda knew about the killings, but took no action to prevent it or ensure justice for the victims.

An internal naval investigation had revealed sordid details of the organised criminal activities of navy officers and men under Karannagoda who kept silent when he was told about the plight of five of the 11 men.

“Had Admiral Karannagoda taken steps at the time he was told about the five children who had been illegally incarcerated by the navy, they could have been saved,” an investigator told the magistrate.

One of the victims, Rajiv Naaganathan, while in navy custody had been able to communicate with his parents using mobile phones of his captors till May 21, 2009. The CID found evidence that the young men had been detained in locations controlled by the then navy spokesman D. K. P. Dassanayake and Commander Sumith Ranasinghe.

Police have found evidence in respect of the abduction and murder of 11 children belonging to Sinhala, Tamil and Muslim communities, but the authorities believe many more would have been killed in similar fashion at a time when “white van” abductions were common.

Eight suspects – all navy personnel – are currently on bail and four are in remand custody. Police have failed to track Karannagoda down till Saturday.

Police also investigated the background of the 11 victims and found they had no links or involvement with the separatist Tamil Tiger guerrillas and that they had been abducted by the navy purely for the purpose of extorting money from their wealthy parents. Two of the victims were Sinhalese – Kasthuriarachchi brothers from Kotahena. There were three Muslims.

The investigation has emerged as a test of the new government’s commitment to ensure accountability, according to international rights groups. They have raised the issue at several international fora, including the UN Human Rights Council.

Two months ago, the country highest-ranking military officer, Admiral Ravindra Wijegunaratne, was granted bail under strict conditions that he will not interfere with witnesses and investigator probing his cove- up of the abductions and the murders.

He was freed on two sureties of one million each. He was also warned not to interfere with witnesses or use his official position to intimidate investigators.

Wijegunaratne had influenced IGP Pujith Jayasundara to transfer the CID’s lead detective handing the case, Inspector Nishantha Silva, according to a letter the IGP wrote in ordering Silva’s transfer. However, following an international outcry, the transfer was canceled and Silva was reassigned to the case.

Wijegunaratne is accused of helping the escape of Chandana Prasad Hettiarachchi, a navy intelligence officer and chief suspect in the murders. Hettiarachchi, who is separately accused of involvement in the 2006 murder of a Tamil legislator, was captured in August.

Prosecutors also told the court that Wijegunaratne and his bodyguards tried to abduct a key witness, another navy officer Lt. Commander Laksiri Galagamage, who had previously testified against him.

The case came to light in May 2009, just 10 days after the end of the war against the Tamil Tigers. Karannagoda in a letter to the then Colombo Deputy Inspector- General of Police, Anura Senanayake, had complained against his own aide-de-camp Lt. Commander Sampath Munasinghe. That report alleged Munasinghe was suspected of involvement with “terrorists” and wanted police to investigate him.

Investigators found that a day before Karannagoda complained to the police, the navy chief had been informed of the organised criminal racket navy personnel were carrying out.

Karannagoda had tried to get Sampath Munasinghe arrested while shielding the others involved in abduction, extortion and murder, the magistrate was told.

The police at the time had made no progress, but the case was revived after the new government came to power in January 2015. Much of the incriminating evidence had come voluntarily from navy personnel who knew about the criminal activities of their colleagues.

(The feature picture at the top is that of former Sri Lankan Navy Chief Adm. Wasantha Karannagoda)