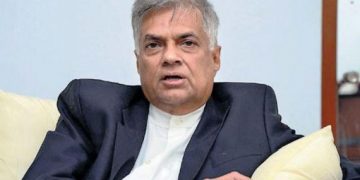 Share on WhatsApp
Colombo, Oct. 28 (newsin.asia) – Sri Lankan Prime Minister, Ranil Wickremesinghe, in a special video statement released on twitter, on Monday, congratulated US President Donald Trump on the successful fight against terror after he claimed that Islamic State (IS) leader Abu Bakr al-Baghdadi had been killed in a U.S. military operation in Syria.
Prime Minister Wickremesinghe said that al-Baghdadi’s killing would undoubtedly cause a set back to the IS group and help the world make a safer place.
“I would like to congratulate President Trump on this successful operation against the fight against terror. The IS group which recently claimed a strike on Sri Lanka has been creating fear and terror around the world. This successful operation makes the world a safer place,” Wickremesinghe said.
Speaking in the White House, Trump said on Sunday that the U.S. Special Operations Forces conducted a raid Saturday night targeting al-Baghdadi in northwest Syria, during which al-Baghdadi killed himself by igniting a suicide vest.
The DNA test from the aftermath positively identified al-Baghdadi, said Trump.
According to the US president, the ISIL chief died after running into a tunnel in the village of Barisha where he detonated an explosive vest, killing himself and three of his children.

In the announcement, Trump thanked Turkey, Syria, Iraq, Russia and the Syrian Kurds for their cooperation.