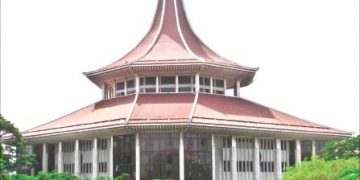 Colombo, September 13 (NIA): The Sri Lankan government on Tuesday told the Supreme Court that it is abandoning the India-Sri Lanka joint venture to set up a coal-fired 500 MW power at Sampur in the Eastern Province.

The decision is in line with the Sirisena-Wickremesinghe government’s policy of protecting the country’s environment by not setting up any more coal-fired power plants. The government wants investors to generate power using Liquefied Natural Gas (LNG) or diesel.

This means that the power plants to be set up by the Japanese (in Sampur) and the Chinese (in Humbantota) will not be coal based but LNG or diesel based.

However, the final decision on the Sampur power plant will have to be taken by the India-Sri Lanka governmental Joint Working Group (JWG). No unilateral decision can be taken by either country.

Sri Lankan President Maithipala Sirisena had informally sounded Indian Prime Minister Narendra Modi about Si Lanka’s inability to continue with the coal fired plant at Sampur, but no official communication on this has yet been sent by Colombo.

Prime Minister Modi himself was non-committal, merely telling Sirisena that he would ask his officials to look into the proposal. And the JWG, which will take the final formal decision, has not met to discuss the issue, till date.

Meanwhile, the engineers of the Ceylon Electricity Board have told the Sri Lankan Ministry of Power that switching to LNG will not only take three years but would also put a heavy financial burden on the government and the people.

CEB engineers are in favor of cheap power, and coal is the cheapest source of energy.

According Bandula Chandrasekhara, who has been creating public awareness of issues in the power sector, the demand for power has been increasing by 8 percent annually and the rate of demand will go up with the coming up of the Colombo Financial City, the Western Province Megapolis and the Humbanbtota Economic  Zone. Sri Lanka would need an enormous amount of power soon and it cannot brook delay ,he says.

Although India can help set up LNG based power plants in Sri Lanka because the National Thermal Power Corporation (NTPC) has experience in constructing such plants, it would like Sri Lanka to stick to coal as it is the cheapest.

The Secretary to the Ministry of Power in India, P.K.Pujari, told visiting Sri Lankan journalists in New Delhi in July, that a coal-powered plant will be more beneficial both in terms of cost and time. He said that the Sri Lankan government had not indicated that it was considering  shelving coal in favor of LNG.

The Chairman of NTPC Gurdeep Singh said that if the Sri Lankan Government wants to convert the Sampur plant into LNG the project will get delayed at least by another seven or eight years.

Other sources in the NTPC said that much spade work has already been done in regard to the Sampur plant and all that will go waste. Switching over to LNG will mean starting from scratch and doing an Environmental Impact Study once again. The plant has been on the drawing board for six years already.

However, India could set up an LNG fuelled 500 MW power plant at Kerawalapitiya on the Western coast of Sri Lanka .

The Sri Lankan government  is believed to be keen on this. According to sources, an Indo-Lankan Joint Working Group (JWG) has been working on various options and the Sri Lankan side had proposed that an LNG-fuelled 500 MW plant be set up at Kerawalapitiya, just north of Colombo, where there is already 300 MW LNG-fuelled plant, set up during the regime of President Mahinda Rajapaksa.

Kerawalapitya is a better location to set up an LNG-fuelled plant than Sampur because it is on the Western coast and therefore nearer Qatar, a major source of LNG, a source in the NTPC said.

According to some experts, an LNG plant will be less costly than a coal-fired plant partly because the price of LNG price is currently low in the international market. And increasing production is expected to keep the price low. Apart from countries in West Asia, the US and Canada are also into LNG production in a significant way. Spot buying can be done at Singapore and Malyasia also, they point out.

Meanwhile, talks are on between Sri Lanka and China on a 500 MW LNG or Diesel-fired power plant in Hambantota in South Lanka, as part of the Economic Zone to come up there, says Bandula Chandrasekhara.