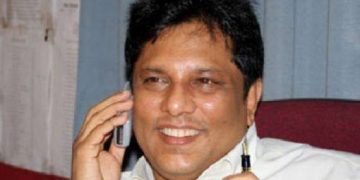 Colombo, September 8 (NIA) – A Sri Lankan court on Thursday ordered investigators to exhume the remains of the fearless editor of Sunday Leader and human rights activist Lasantha Wickrematunge, who was assassinated in January 2009.

The Mount Lavinia Magistrate Court issued the order considering a request made by the Criminal Investigations Department. The request was granted on the grounds that the postmortem conducted in 2009 was suspicious.
The body is to be exhumed on September 27, according to court orders.
Wickrematunge was the founding editor of the privately-run Sunday Leader newspaper. He was shot dead on January 8, 2009 by a group of unidentified men, at Attidiya in the outskirts of the Sri Lankan capital while he was driving to work in broad daylight.

He was a staunch critic of the then government of President Mahinda Rajapaksa. But the Establishment denied any role in the editor’s killing.

But the Sri Lankan government led by Maithripala Sirisena, which came to power in January 2015, reopened investigations into Wickrematunge’s murder, vowing to commence a thorough investigation and arrest all those involved in the killing.

The outspoken and fearless editor of The Sunday Leader  was posthumously awarded  the UNESCO/Guillermo Cano World Press Freedom prize.

A tribute which appeared in the website www.unbowedandunafraid.com said that Lasantha’s  humility and steadfastness of  purpose transcended superficial achievement. When he wrote in his final editorial that there is, “a calling that is yet above high office, fame, lucre and security,” he meant it. He lived it.

“For the Mahinda Rajapakse administration he was the biggest thorn in their flesh. Week after week he reported on governmental waste, corruption and excess. He investigated corrupt military procurement deals, spoke out strongly and passionately for a negotiated settlement to the ethnic conflict and debunked blatant government propaganda on the war,” the tribute said.

“Lasantha’s grouse with a military solution to the conflict as pursued by the present government and its extremist allies was the staggering civilian cost. He genuinely felt that while it was important to eliminate the LTTE it was important also to respect the lives of minority Tamil civilians.”

“However by bombing LTTE targets from the air and even treating civilian hospitals in LTTE controlled areas as legitimate targets the government itself was resorting to terrorism. And it is to this that Lasantha objected. These he called war crimes because had these targets been in majority Sinhala areas it is inconceivable that the government would have bombed them. That is what he felt. That is the stand he died for.”

“Lasantha was a martyr for the cause of free expression. The right to be a dissident. It is no secret that in the absence of a viable opposition in the country it was he who gave leadership to the cause of dissidents. He spoke on behalf of the underdog. The down trodden. For those who couldn’t speak up for themselves. He was a man of deep faith but he spoke up for those with no faith. He died to establish a liberal secular democracy. That was his hope for Sri Lanka. And this was anathema to a govt which is now trying to take Sri Lanka in the direction of a mono ethnic theocracy.”

“Lasantha knew he was on the government’s hit list, but felt it cowardly to take precautions against an attack. He felt it was impossible to protect himself against the resources of the government, short of abandoning his career as a journalist and fleeing the country he loved.”

“In the course of the past several years, Lasantha has been the victim of physical assaults, shootings, and attempts to arrest him. Lasantha was constantly under threat. The presses of the newspapers he and his wife Sonali edited were set on fire. There were constant threats over the phone. The newspaper was sealed under emergency regulations. The Criminal Investigations Department (CID) was often sent to question him and his wife to reveal their sources that led to exposes of corruption and excess in government.”

“Lasantha was no coward. He did not hide behind a gun or a human shield. He viewed with majestic scorn the risks he ran. And underneath his gentle surface other currents moved. The need to fight for justice and fair play. He knew that if he did not speak out for those who couldn’t speak for themselves there will be no one to speak out for anybody in the future,” the tribute in www.unbowedandunafraid.com said.