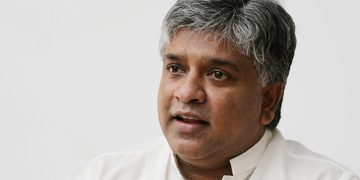 Colombo, August 25 (The New Indian Express): In a bid to balance India and China, Sri Lanka appears to be in favor of an Indian companies-led consortium to build the Third Terminal at Colombo port and secure business for it. China has already been deeply involved in port development in Sri Lanka, having built a modern container terminal in Colombo and a full-fledged port from scratch in Hambantota.

The Minister of Ports, Arjuna Ranatunga, told the Foreign Correspondents’ Association here on Thursday, that Prime Minister Ranil Wickremesinghe is keen that the consortium be led by companies from the Indian sub-continent. Those companies could be from either India, Pakistan or Bangladesh, the Minister said. However, it was apparent from the Minister’s presentation that Sri Lanka has India and an Indian company-led consortium in mind.

Apart from the business angle, Prime Minister Wickremesinghe is also looking at the political and strategic angle, Ranatunga said. India is be involved as Sri Lanka has to keep a balance between India and China, he hinted.

China is already involved in the Colombo port in a big way. The Colombo International Container Terminal (CICT) is a joint venture between China’ Merchant Holding International and the Sri Lanka Port Authority, in 85:15 proportion of equity sharing. It has been a remarkable success. On efficiency parameters, the Colombo port is now among the top 50 ports in the world, and is the leading port in the South Asia region. China has also built Humbantota port in South Sri Lanka on the main international trading route.

But given the importance of Colombo port for Indian shipping, India is keen to have a foothold in it.

About 20 companies from across the world, including some from India, have taken the tender documents for the Third Terminal. Of these, Minister Ranatunga mentioned two from India: the Tatas (who are into shipping and logistics) and Shapoorji Pallonji Forbes Shipping Ltd., both registered in Mumbai. Two or three Chinese companies have also taken the tender documents, as the Chinese are interested in the Sri Lankan shipping sector given the importance Sri Lanka has in China’s ambitious  21st.Century Maritime Silk Route Project, Minister Ranatunga said.

The Sri Lanka Ports Authority (SLPA) has already built 430 meters of the Third Terminal at a cost of US$ 80 million and is looking for a Joint Venture to extend it to 1,200 meters. This would need up to US 400 million more. The Third Teminal will be a major asset to shipping in the region as it will have a depth of 19 to 21 meters, he said. India has no port with comparable depth and hence India’s interest in the development of Colombo port, Ranatunga said.

SLPA expects the Joint Venture partner to bring in 20 percent. SLPA’s share will be 15 percent. The consortium will have to assure at least one million TEUs a year.

Giving an overall view of SLPA’s goal, the Minister Ranatunga said that through the Colombo port mainly, Sri Lanka handled 5 million TEUs in 2015 and that could  go up to 7.5 million TEUs this year. With the completion of the Third Terminal, 10 million TEUs could be handled, he said.

To add to Colombo’ capacity, there is a plan to build a West Terminal also. Besides port development in Sri Lanka, the SLPA is planning to have two “sister ports “ in India, which are likely to be Mumbai and Kolkata.

“We can have deals to share the business and help each other in times of difficulty like strikes and bad weather conditions,” Ranatunga explained.

Referring to the Humbantota port built by the Chinese with Chinese funds to the tune of US$ 1.2 billion, the Minister said that with the loan repayment , its cost has gone up to US$ 1.3billion.

“The government is negotiating with China on reducing the interest rate. The  question of converting the debt into equity proposed by Sri Lanka is also being discussed,” he said.

The Minister said that Sri Lanka “appreciates” China’s assistance to enhance infrastructure in the country and added that a Chinese airline has proposed to use the unused Mattala airport (also built by China) instead of Colombo airport to fly passengers between China and the Maldives. Hundreds of thousands of Chinese tourists visit Maldives. Chinese tourists are now pushing Indians out of the number one position in Sri Lanka’s tourists arrivals also.

The Sri Lankan government had asked China to help set up industries in the Humbatota region. The Chinese had asked for 15,000 hectares for this.

“We are trying to get the land but it won’t be in one place but 15 or 20 different places,” Ranatunga said.

The Minister said that the stalling of Chinese projects in Sri Lanka was not due to any anti-China sentiment but due to the undesirable deeds of the Chinese companies involved.

“We want everything to be transparent and over the table and not under the table.”