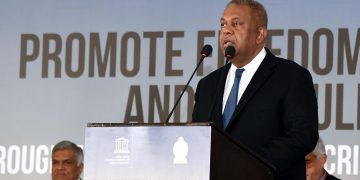 Sri Lanka vows to end impunity on crimes against journalists

Sri Lanka vows to end impunity on crimes against journalists Colombo, Dec 4 (newsin.asia) – The Sri Lankan government, on Monday vowed to end impunity for crimes against journalists and expedite investigations into the killing and disappearance of journalists in recent years.

Minister of Finance and Mass Media, Mangala Samaraweera, speaking at the opening of the UNESCO Regional Conference on Reinforcing Regional Cooperation to Promote Freedom of Expression and the Rule of Law in Asia through Ending Impunity for Crimes against Journalists, said that while Sri Lanka was one of the most unsafe places for journalists, not too long ago, the government of Maithripala Sirisena had succeeded, to a large extent, in creating a safe space required for freedom of expression.
“We must keep on working hard to sustain and safeguard this space, and we still have a long way to go in terms of completing investigations into past crimes, including the murder of journalists in the past,” Samaraweera said.
“This is an important occasion for us locally, to renew our commitment to justice, in memory of all the journalists who have been silenced, and in recognition of the importance of a free and independent media, for advancing peace, development, and good governance in our country,” Samaraweera added.
Samaraweera further added that that Sri Lanka remained firm in its commitment to work with the international community, including UNESCO, to work towards ending impunity for crimes against journalists, and to uphold the rights of journalists around the world who place themselves at risk every day, to give voice to the voiceless.
Prime Minister, Ranil Wickremesinghw, speaking at the event said that the government welcomed the UN Plan of Action process to protect the safety of journalists and Sri Lanka would continue to strengthen its democracy to ensure the smooth implementation of the UN Action Plan.
“I am proud to say that we have achieved great global recognition for the steps we have taken in only two years,” Wickremesinghe said adding that those who were responsible for all cases of attacks and harassment on journalists would be brought to justice.
SendShare2Tweet1ShareShare