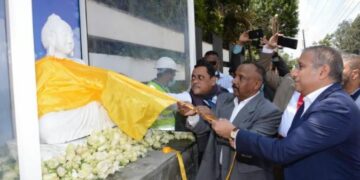 Nairobi, July 18 (Daily FT) – The Sri Lanka High Commission in Nairobi, Kenya, has installed a statue of Lord Gautama Buddha outside the premises of the Chancery building.

Religious observances including chanting of Gatha, Buddha Pooja and worship were conducted during this event. The shrine was constructed by renowned Kenyan-Sri Lankan company Mayleen Group.

The LOLC Group has already expanded its footprint to the African continent – Nigeria and Zambia in West and East Africa respectively.

The group made its maiden finance sector investment in the African region by acquiring a controlling stake of FinaTrust Microfinance Bank in Nigeria and thereafter commenced operations in Zambia by incorporating LOLC Finance Zambia as a greenfield operation.

LOLC’s global expansion strategy remains a key focus and plans are in the pipeline to expand into more markets in Africa, the world’s second largest and second-most populous continent.

In a statement to the press, LOLC stated it was extremely grateful to the High Commissioner Kananathan for extending his cooperation and unstinted support towards their expansion program in the continent.

LOLC said it strongly believes that the success experienced in the microfinance arena in the Asian region can be replicated in the African continent as well, thereby uplifting the livelihoods of the African community and bringing prosperity to the people at the bottom of the pyramid, thereby infusing formidable stability and resilience to the respective economies.

Addressing the large gathering of Sri Lankans in Nairobi, as well as the Kenyan press, during the unveiling ceremony, High Commissioner Kananathan said: “The unveiling of the statue of Lord Gautama Buddha is a unique occasion and it turns a new leaf in our bilateral relations to demonstrate our Buddhist heritage in Kenya.

I take pride to represent Sri Lanka in Kenya and feel blessed to have the installation of the Buddha Statue in front of the High Commission premises. I take this opportunity to thank Ishara Nanayakkara for readily agreeing to grace this blessed event.”

The High Commissioner remarked that the installation of the Buddha Statue was done with the full support and patronage of the Kenyan government authorities. The High Commissioner further added: “The public display of the Lord Buddha statue would constantly remind us of Lord Budda’s noble teachings of peace and harmony which is mostly required in all communities, countries and the world.”

He concluded by stating that Lord Buddha’s eternal message of peace and compassion has continued to inspire humanity around the world and quoted Lord Buddha who said: “He who experiences the unity of life sees his own self in all beings, and all beings in his own self, with an impartial eye.”