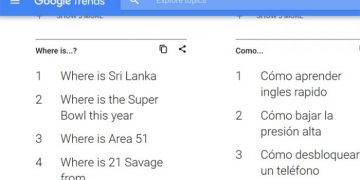 Sri Lanka trumps superbowl location among US Google searches in 2019

Sri Lanka trumps superbowl location among US Google searches in 2019

Google’s Year in Search list for 2019 showed Sri Lanka topping the ‘Where is?’ category. December 14 (Economy Next) – Among Americans trying to locate places of interest, Sri Lanka topped the list beating the Superbowl venue and Area 51, Google trends, published by the search engine, shows.

Google’s Year in the Search list for 2019 showed Sri Lanka topping the ‘Where is?’ category.

Sri Lanka hit global headlines in 2019 for being named Lonely Planet’s best tourist destination and other similar accolades from travel publications such as Travel and Leisure and Conde Nast Traveller.

Sri Lanka came ahead of second-placed Super Bowl, the annual championship game of the National Football League, which is the country’s highest watched TV event, on the ‘Where is?’ list.

US Google search users also wanted to know where was Area 51, in a year where the ‘Raid Area 51’ Facebook event, created as a joke, to find evidence of extraterrestrial life became an internet sensation and even featured on the top 5 news searches on google.

The top five travel destinations most searched by US Google search were The Maldives, Japan, Bora Bora, Las Vegas, and Mexico.