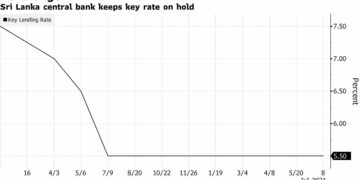 There may be some inflows to the government coming in July, which could also be used toward the debt obligation, Governor Weligamage Don Lakshman said at a press conference in Colombo on Thursday. The nation’s reserves stood at about $4 billion, according to a central bank statement last month.

His comments seek to quell doubts about the nation’s ability to service the July 27 debt obligation amid dwindling forex reserves and rising risk premium for a default. The nation still has two more payments totaling $1.5 billion that becomes due in the next 12 months.

“Adequate financing strategies have been lined up to maintain reserves at sufficient levels and to meet all maturing debt servicing obligations of the government on time,” the monetary authority said earlier Thursday after keeping interest rates unchanged to support the economy’s recovery.

While rates were maintained despite inflation edging up toward the upper end of its 4%-6% target band, the central bank said it stands ready to act to keep price-growth in mid-single digits. However, any action appears unlikely before next year as the monetary authority sees inflation within target for the remainder of 2021.

The government separately named a new finance minister to steer the economy out of the current crisis caused by the coronavirus pandemic. Basil Rajapaksa, the brother of Sri Lankan President Gotabaya Rajapaksa, was sworn in as the finance head.

Basil Rajapaksa was previously a minister of economic development in 2010. Prime Minister Mahinda Rajapaksa, who was hitherto overseeing the finance ministry, will now be responsible for economic policy planning.