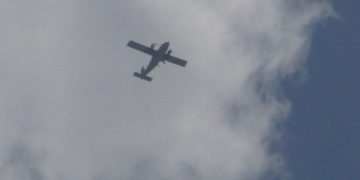 Share on WhatsApp
Colombo, March 22 (newsin.asia) – The Sri Lankan government, on Friday, for the first time, successfully tested artificial rain in a drought hit area to provide clean water to hundreds of families.
The Power and Energy Ministry, in a statement said the Ceylon Electricity Board together with the Sri Lanka Air Force conducted the project, which caused rainfall for 45 minutes in the catchment areas of the Maussakelle Reservoir, in the Central Province.
A Sri Lanka Air Force helicopter was used to spray chemicals on the clouds, 8000 feet above the reservoir, resulting in 45 minutes of rainfall.
“Observing the success of the pilot project which commenced today, Power and Energy Minister Ravi Karunanayake has instructed relevant authorities to take necessary measures to create artificial rains in the next few days until the dry weather exists in the country,” the Ministry said.
The pilot project was launched following assistance from a special team who had arrived in Sri Lanka from Thailand.
The Ministry said the main aim of the project is to create rains during the drought seasons.
The Ministry added that the project was carried out after a memorandum of understanding (MoU) was signed between the Sri Lanka Air Force (SLAF) and the Ceylon Electricity Board (CEB) in January. The Sri Lankan Air force is providing the necessary flights and other services towards the project.
In February last year, a group consisting of Thai engineers visited the Castlereigh and Maussakelle Reservoirs in the catchment areas of the Central Highlands to seek the possibilities of creating artificial rain as water levels in these reservoirs had seen a drastic drop.
Local media reports said the Thai engineers represent the only company in the world that has the patent to create artificial rain.
The company had created artificial rain when the island country was severely affected by a drought in 1981.
Hundreds of families remain affected by months of severe drought due to the lack of rains and delayed monsoonal rains in the central parts of Sri Lanka.
SendShare10Tweet1ShareShare