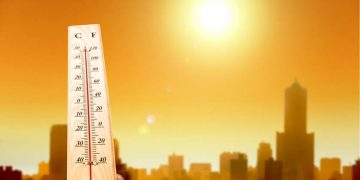 In a statement, the DMC said that the heat advisory had been issued for Friday, Saturday and Sunday, and districts such as Polonnaruwa, in North Central Sri Lanka, Batticaloa and Ampara in eastern Sri Lanka were urged to remain cautious.

DMC spokesman Pradeep Kodippili said that hot and humid days were expected to continue in Sri Lanka for over a month while the Meteorology Department had cautioned that temperatures in some regions could rise to extreme caution ranges.

“Public are advised to stay hydrated and be in the shade as much as possible,” Kodippili said.

“The dry conditions will dominate most parts of the country and there will be no rains in most regions,” he added.

According to the DMC, already over 100,000 people from many dry parts of the island are facing a severe drought due to the lack of rains and water browsers were being sent into the affected areas.